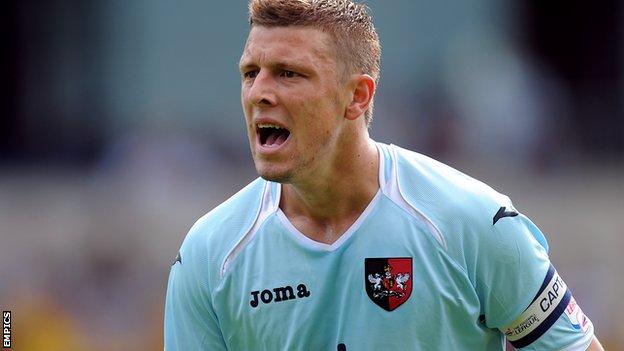 Exeter City captain Danny Coles has signed a new contract at the club.

City have refused to disclose the length of the 30-year-old's deal, but the news comes just days after fellow defender at the club.

Coles and has played 51 games for the club, scoring three goals.

He missed a large chunk of last season after

"It's been a long year for me with regards to the injury I've had, so to get back playing and get a new deal, I jumped at the opportunity," Coles told BBC South West Sport.

"I've been consistent with my performances and the manager has felt it's a good time to reward me, so I'm delighted."

Exeter manager Paul Tisdale regards Coles as a key member of his squad as he looks to build for the future.

"We see him being a fundamental part of how we progress over the next couple of seasons," he said.

"He's a large part of what we do, he's the captain and that means something to us.

"He's played extremely well, he's played every game this season, looks fit and strong, and wants to do everything for the team.

"I'm very pleased that he's prepared to commit to this club beyond the the end of this season."