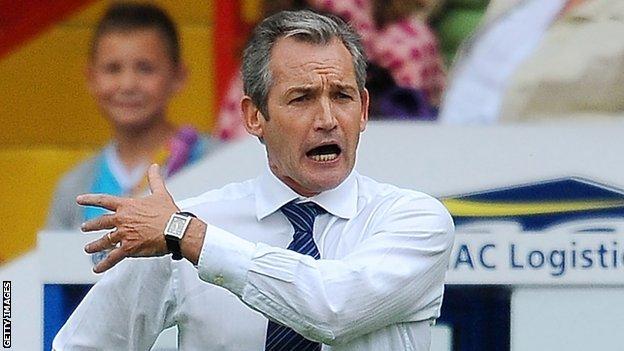 George Burley has said he will apply to become Ipswich Town manager, 10 years after he was sacked by the club.

Burley was boss at Portman Road for eight years, taking Town to the Premier League and Uefa Cup qualification.

"I think I'm the most successful manager there in the last 30 years. The passion's still there. Naturally I'd be interested," he told BBC Radio Suffolk.

with the club bottom of the Championship and winless in 11 games.

Burley, 56, has a long standing relationship with Ipswich, starting his career there as a defender under legendary manager Sir Bobby Robson in 1973 before going on to be part of a golden era, winning an FA Cup and Uefa Cup.

He has managed the national side for his native Scotland and has had spells at Derby, Southampton and Crystal Palace.

He added: "My life's been around Ipswich all my football career since I was 15 years old. I'm moving back to Suffolk soon. When you've got it in your blood it's something you don't forget."

The pair are former team-mates at Newcastle, where Shearer was manager towards the end of the 2008-09 season.

"I would love to see Alan Shearer as manager," Chopra tweeted. "Such a good person and played under some great managers including Sir Bobby Robson."

And Harry Redknapp, who counts Tottenham, West Ham and Southampton among his previous clubs, had previously been

The former England and Ipswich defender Terry Butcher, currently in charge at Inverness Caledonian Thistle, is also in the frame.