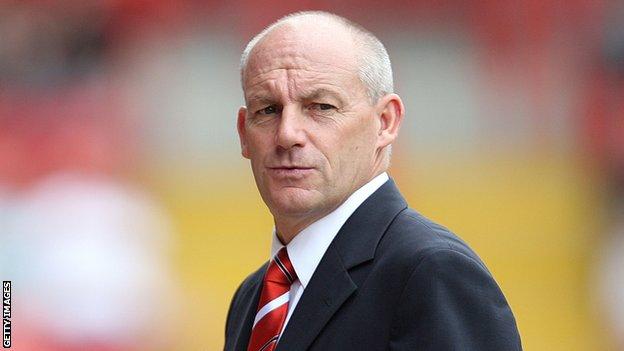 Crystal Palace co-chairman Steve Parish says he will contact Steve Coppell about their managerial vacancy after the departure of Dougie Freedman.

Coppell, who is currently director of football at Crawley Town, has had four separate spells managing the Eagles.

Parish told BBC London 94.9: "He's always someone we would consider. But the situation has to be right for Steve and he would have to want to do it.

"I'm sure we'll be taking his counsel at the very least."

Coppell spent nine years in charge of Palace between 1984 and 1993, leading the Eagles to promotion to the First Division in 1989 and the FA Cup final the following year.

The former Manchester United player departed south London following the club's relegation from the Premier League in 1993 but returned to Selhurst Park for three separate spells in the mid-to-late 1990s.

Coppell, who has also managed Manchester City, Brentford, Brighton & Hove Albion and Reading, has not been a number one since quitting Bristol City in August 2010 after just four months and two games in charge.

Parish said that even if Coppell is not interested in the manager job, he will ask who he thinks is best suited to replace Freedman, who has joined Bolton Wanderers.

"We've got to be respectful because he works for Crawley," Parish added.

"He has always been a great friend to the club from when I took over with Steve Browett, Jeremy Hosking and Martin Long. He has been very helpful and always has been available on the phone.

"I value his advice greatly. He's a very wise guy and has achieved everything in the game. He's got Palace at heart so I know he gives us good advice based on the right things.

"I'll definitely be speaking to him but whether it's as manager, I don't know."

Parish would like to have a new man in charge before their game at home to Blackburn Rovers a week on Saturday.

"We sat down and had a meeting on Wednesday and went through a long list of managers," he said.

"Some have contacted us through agents and some we have our eyes on. We'll try and hone that down to a shorter list and thinking about how we approach them and organise interviews.

"Lennie Lawrence will take charge of the game on Saturday [away to Leicester]. We don't want to try and rush anything through this week."