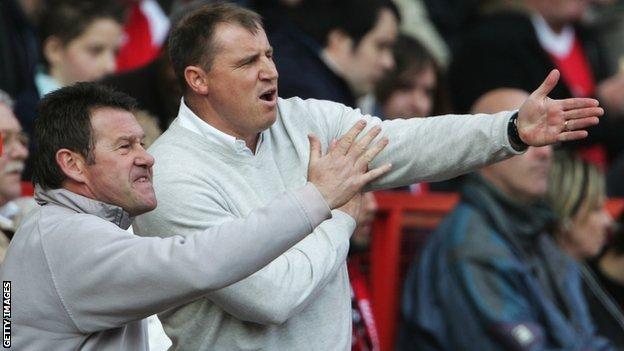 Paul Jewell says he would like to see his former assistant Chris Hutchings replace him as Ipswich Town boss.

Hutchings was put in caretaker charge after and will lead Town out against Sheffield Wednesday this weekend.

"I hope we win Saturday and I'd like Chris to get the job," Jewell told BBC Radio Suffolk.

"Whether Marcus is going to bring somebody in is out of my remit. Whether it's Hutch or somebody else - it's a great job."

Hutchings is accustomed to taking over from Jewell, having done so at Bradford and Wigan, but was sacked both times.

He was also caretaker at Derby very briefly when Jewell quit in December 2008.

But the former Chelsea defender has avoided spelling out his ambitions at Portman Road.

Derby, Wigan and Bradford fans will be familiar with seeing Chris Hutchings take over their team following Paul Jewell's departure.

His Wigan spell was shorter, winning two of 13 games.

He was handed the reins for just one game as caretaker at Derby before Nigel Clough was appointed.

"I fancy it for Saturday," he said. "We'll have to see how it develops. It's one day at a time for me.

"It's always unsettling for any club when the manager's gone. There's going to be names banded about. I deal with. I can't influence that. I can only influence what happens Saturday."

Jewell left Ipswich with the club bottom of the Championship and winless in 11 games.

He received criticism for failing to secure a settled squad and for the number of loan signings he made this term - eight in all.

But he insists he received the constant backing of Evans, who has yet to get close to taking Town to the Premier League since he bought the club five years ago.

"You couldn't have a better owner," he said. "Some chairmen and owners want to pick the team, but with Marcus absolutely not.

Analysis - Who next for Ipswich?

"I like Mick McCarthy. He's a very good manager. he knows what it's all about and he'll get players playing for him. He'd be top of my list with the likes of Alan Curbishley and Mick Mills."

"Whoever gets the job is going to be lucky. Working with someone like Marcus has been fantastic. In football terms he lets you get on with it. We haven't done as well as we'd like but the owner is top drawer.

"I never really had the feeling this was my team. It chopped and changed a lot. The players have worked hard enough we just haven't been able to get on a run.

"It's not a poison chalice. It's a difficult job. But it's a brilliant job.

"The team lacks pace and strength. That's what we tried to get but we couldn't get it. I tried to address it over the summer but the players I wanted weren't available."