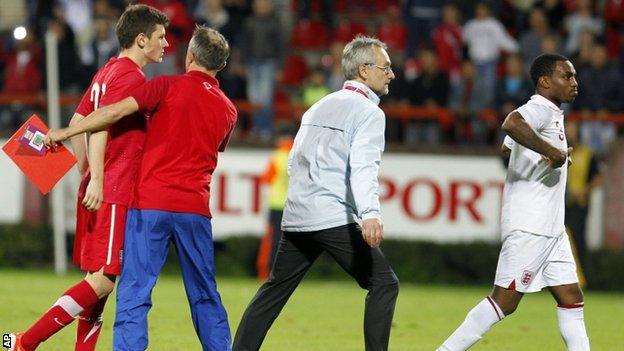 The Serbian Football Association has suspended Nikola Ninkovic and Ognjen Mudrinski for a year.

The duo cannot play in any Serbian national team in that time after brawling after their 1-0 defeat to England Under-21s on 16 October.

Ninkovic, 17, and Mudrinski, 20, were involved in the melee following the full-time whistle in Krusevac.

Uefa charged the Football Associations of England and Serbia in the wake of the game, where England's black players were racially abused.

In a statement on their website, the Serbian FA (FSS) said: "Having reviewed the television footage of the incidents, the FSS disciplinary committee decided to ban Ninkovic and Mudrinski from playing for Serbia at any level for a period of one year.

"Also, staff members Srdjan Maksimovic and Andreja Milutinovic have been banned from their coaching duties at any level for Serbia for two years. All four have violated the FSS ethics and fair-play code."

The FSS initially denied any form of racism towards the England players, but subsequently called an investigation in which all of the players and staff involved were asked to give statements.

Players from both teams clashed on the pitch following the final whistle amid accusations of racism from the stands towards England left-back Danny Rose.

The cases will be dealt with at a meeting of Uefa's control and disciplinary body on November 22.