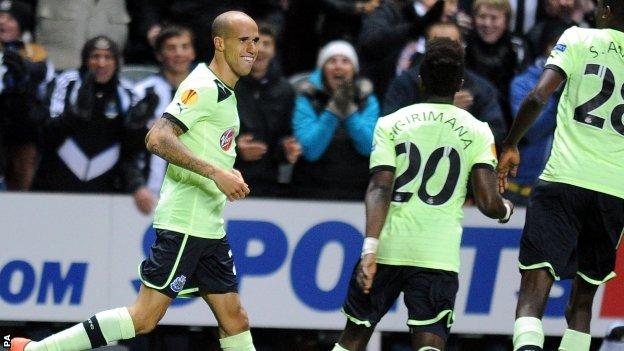 Alan Pardew said Newcastle owed Gabriel Obertan a "big debt" after his goal was enough to and move the Magpies three points clear at the top of their Europa League group.

The French winger scored three minutes after the break after good work from the Ameobi brothers, Shola and Sammy.

"He's still only 23. He has a fantastic future," said the Magpies boss.

"We owe him a big debt for the last two European games because we wouldn't have won without him."

Pardew added: "He's been terrific for us and hopefully he'll play a bigger part in the Premier League as we go along."

Pardew made nine changes from the side that drew 1-1 with Sunderland on Sunday, giving the starting XI a youthful look.

"It was a great performance because [Bruges are] a good team," he said.

"They keep the ball very, very well and that's why they're top of the league. They've got experience in the team.

"But our young players shone tonight and that's what it was about. I showed faith in them because they've been doing it on the training ground.

"Do it on the training ground and you've got a chance of performing on the big stage and Sammy and Fergie [Shane Ferguson] have been terrific in training and they took it into the game and that's perfect for a manager."

Pardew believes his side are likely to progress if they get four points from the fixtures away to Bruges and at home to Maritimo.

"We haven't focused too much on this league, more on the Premier League," he added.

"It will be tactically interesting how we approach the next two Europa games - if we get a win and a draw then we'll be in a good position."