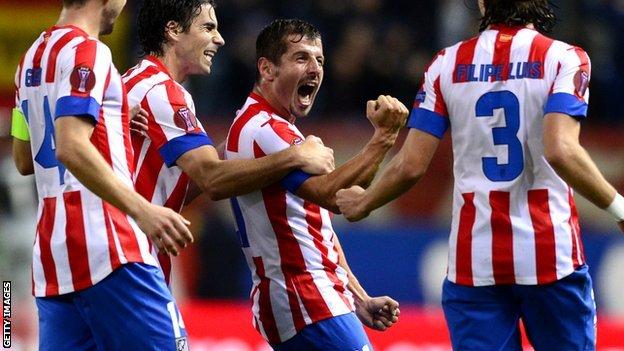 Reigning champions Atletico Madrid are all but through to the knockout stages after a 2-1 win over Academica.

Goals from Diego Costa and Emre saw the Spanish side home despite a late Salim Cisse consolation.

Dnipro also retain a 100% record with a 3-1 win over Napoli, as do Lyon thanks to Jimmy Briand's late goal in their 2-1 win against Athletic Bilbao.

But Marseille, who had topped their group, slipped to third after losing 2-0 away to Borussia Monchengladbach.

Lyon, Dnipro and Atletico Madrid are the only three sides left in the competition with 100% records.

Liverpool head the group after a crucial 1-0 win over Russian side Anzhi Makhachkala, thanks to a Stewart Downing strike after 53 minutes.

Udinese suffered a shock 3-1 defeat away to bottom side Young Boys in Switzerland with Raul Bobadilla grabbing a stunning hat-trick.

Plzen moved clear in second with a 2-1 win at Hapoel Tel Aviv. Frantisek Rajtoral hit the late winner before home defender I'yad Hutba was sent off.

Egeman Korkmaz scored in the 72nd minute to give Fenerbahce a 1-0 win at AEL Limassol and move them top.

Marseille, who started the night heading the table, lost 2-0 at Borussia Monchengladbach. The result moves the Germans level with their opponents on four points, with the Turkish side now out in front on seven.

Newcastle strengthened their hold on the group, winger Gabriel Obertan giving them a 1-0 win over Club Bruges, while second-placed Bordeaux were held 1-1 at Maritimo.

Yoan Gouffran's opener for the visitors was cancelled out by Roberge Valentin six minutes later.

Steaua Bucharest extended their lead at the top as goals from Vlad Chiriches and Raul Rusescu gave them a 2-0 win over Molde.

Group rivals Stuttgart and FC Copenhagen played out a goalless draw in Germany.

Dnipro went five points clear at the top with a 3-1 win over Napoli in Ukraine - Artem Fedetskiy, Matheus and Giuliano scoring before Edinson Cavani replied with a late consolation.

PSV Eindhoven and AIK drew 1-1 in Holland with Kwame Karikari putting the previously pointless Swedes in front on the hour before Jeremain Lens equalised with 10 minutes to go.

Elyaniv Barda headed a late winner as Genk stayed unbeaten at the top of the group after coming from behind to see off Sporting Lisbon 2-1 in Belgium. Barda struck with three minutes to go after Sporting's Khalid Boulahrouz was sent off for a second bookable offence.

Hungarians Videoton beat Basle 2-1 with Fabien Schar atoning for an early own goal by scoring at the right end in injury time.

Rodrigo Palacio headed home an 88th-minute winner as Inter Milan saw off Partizan Belgrade at the San Siro and all but booked their place in the knockout stages.

Lyon maintained their 100% record with a 2-1 win over last year's beaten finalists Athletic Bilbao. A Lisandro Lopez opener was cancelled out by Ibai Gomez before Jimmy Briand struck the winner four minutes from time.

It took a Jose Toche injury time equaliser for Panathinaikos to draw 1-1 with Lazio in Group J. An earlier own goal from defender Giourkas Seitaridis looked set to give the Italians the points before Toche's final touch.

Gylfi Sigurdsson earned Tottenham a point in a 1-1 draw at Maribor, who led through Robert Beric. Lazio remain unbeaten on five points with Maribor in second, but all four sides in the group are still in the running.

Bonfim Marlos and Cleiton Xavier gave Ukrainians Metalist Kharkiv a 2-1 win at Rosenborg after the Norwegians had led through Tarik Elyounoussi's 46th-minute strike.

But Metalist Kharkiv still conceded top spot in the group to Bayer Leverkusen, whose impressive 4-0 win at Rapid Vienna took them first on goal difference.

Hannover stay top after a 2-1 win at Helsingborg. Mame Biram Diouf opened the scoring for the Germans with Alvaro Santos equalising in injury time, only for Didier Ya Konan to restore Hannover's advantage in the third minute of added time.

Levante moved clear in second place with a 3-0 win over Twente, a Michel penalty followed by Pedro Rios adding a late double.