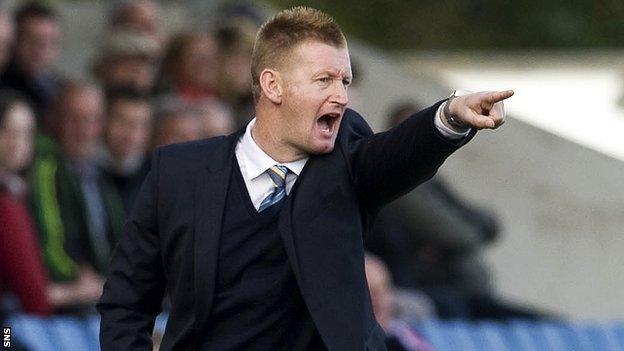 Steve Lomas hopes fear of losing will give his St Johnstone players the motivation to extend their winning run.

The lads have got to do what they have been doing

"Once you think you are just going to turn up and win, you end up getting found out and we have to guard against that," said Lomas.

"I always liked a bit of a fear factor when I played."

Lomas, who described reports linking him with the managerial vacancy at Burnley as speculation, was under pressure at the start of the season after the Perth side took two points from their opening five Scottish Premier League matches.

But a 2-1 win against Celtic turned around St Johnstone's fortunes and set them on their winning streak.

"It is about not getting too high when you win and too low when you lose," said Lomas.

"It is great when you are confident, as long as that doesn't turn into complacency.

"It is my job to analyse everything. I am a big believer in performances individually and collectively and if you have enough of that it normally takes care of results over the course of the season."

Next up for Saints is a trip to Terry Butcher's Inverness, another of the SPL's form sides with three wins in their last three.

"Terry Butcher and his boys have been fantastic," added Lomas.

"They have had a high turnover of players like us and he has used his contacts to good effect.

"I watched them win at Dundee and they have players who can hurt you so it has the makings of a good game.

"But we know that if we are not on our game we will get found out up there.

"So the lads have got to do what they have been doing and hopefully it is enough."