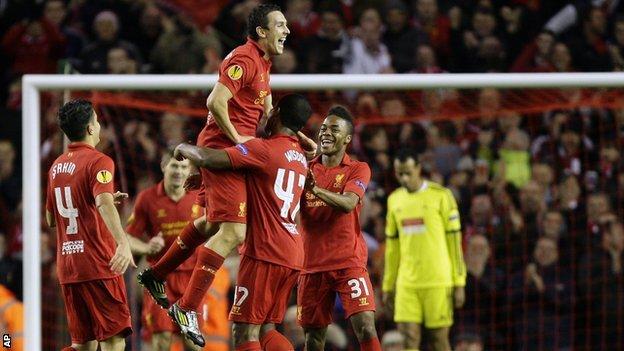 Downing has endured a difficult time at Liverpool since Rodgers took over, starting just one Premier League game.

But his second goal of the Reds' Europa League campaign pleased his boss, who conceded he had had a "rough ride".

"It's been a tough time but he's a good guy. He's had a rough ride but he's an important member of our team," he said.

Despite being reluctant to use Downing in his strongest line-up, and asking him to play left-back in some European games, Rodgers was determined the England man should have his moment in the spotlight.

He guided the winger towards the club's fans at the final whistle to ensure he enjoyed their applause.

"He got a good reception from the Kop," said Rodgers. "He scored a brilliant goal. Stewart is a wonderful technician off either foot."

Downing insisted he was happy to fight for his place at Anfield, as he reflected on his 53rd-minute strike, a stunning right-footed effort.

He said: "It was crowded around the box so I just thought hit it.

"They made it hard for us, so it was off the cuff."

And he added: "Football is full of ups and downs. It is how you react to them and I'm working hard to get back into the team."

The victory was Liverpool's second in a row at Anfield and gives them a confidence boost before Sunday's derby with Everton.

Rodgers puts the upturn in form down to a greater appreciation of his demands by Liverpool's players.

He added: "What we are now getting is comfort with the mentality of how we want to play and adding some steel."