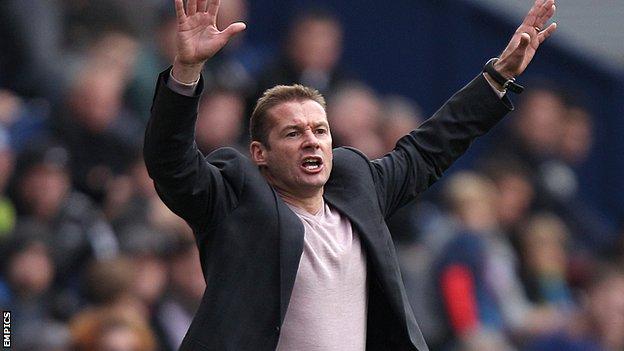 Preston manager Graham Westley says he has no problem with Ronnie Moore, ahead of their match at Tranmere on Saturday.

Westley believed comments made by the Tranmere boss about Preston, while he was working as a television pundit on a North End match, were "disrespectful".

"People have been raising the issue with me," he told BBC Radio Lancashire.

"I've said I completely understand where he was coming from. He's manager of the month and he's flying high at the top of the league."

Moore was critical of Preston's first-half performance during their 0-0 draw against MK Dons on 14 October.

I'm sure the fans will be there in their numbers at the weekend, and after [losing 3-1 at] Oldham, we know we owe them one

Westley continued: "Any manager could get tempted to say a little bit more than he wanted to say. Anyone would enjoy being [Jose] Mourinho for the day, wouldn't they?"

Earlier this month, following a win at Doncaster, the former Stevenage boss admitted he was tired of constantly having to defend his teams against

After going 12 matches unbeaten at the start of the campaign, Tranmere have lost their last two games and seen their lead at the top of League One cut to a single point.

Preston, meanwhile, go into the game at Prenton Park on the back of a in midweek.

Westley endured a difficult start to his reign as he endeavoured to make his mark at Deepdale, but his new-look side have shown glimpses of the form he hopes will see them finish in the top six at the end of the season.

And the North End boss has paid tribute to the club's supporters, who are expected to be out in force again on Saturday.

"That fan base has stuck with us through the thin times," he added. "We've given them a couple of better days away from home at Doncaster, Scunthorpe and Bury.

"I'm sure the fans will be there in their numbers at the weekend, and after [losing 3-1 at] Oldham, we know we owe them one."