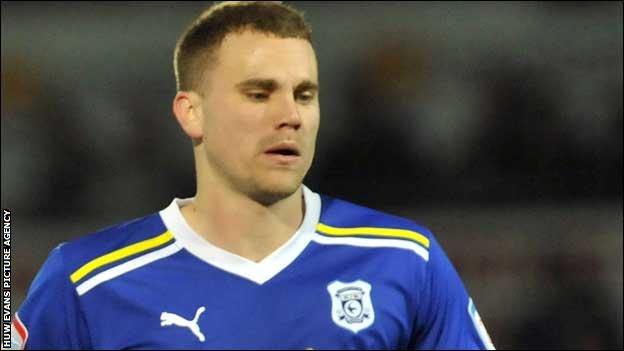 Cardiff City defender Ben Turner has admitted he rejected the chance to play international football for Wales as he did not want to "kid" anyone.

Turner qualifies for Wales through his Welsh grandmother and Wales boss Chris Coleman instructed scouts to watch the ex-England Under-19 centre-back play.

But Turner, 24, rejected the offer to change allegiance rather than to "pretend to be a Welshman".

"I'm English and that's how it is," the Birmingham-born player told BBC Sport.

"I wouldn't want to stop anyone for wanting to play international football if they felt it was right for them and they can justify it in their own head.

"But I couldn't justify it for me and clear my own conscience.

"It would be like I was pretending to be a Welshman when I'm not.

"I wouldn't want to kid anyone but at the same time I don't want to annoy anyone either because that's not my style.

"It was very flattering to be asked and I know Chris Coleman well from when we were both at Coventry.

"It went through my head that 'who am I to turn down playing for Wales?'

"But I'm not doing it because of that, I'm doing it for my own reasons which are the right reasons.

"Would a Welsh guy asked to play for England, would he do that?

"I probably won't have the chance to play for England but, in my head, that's not the point."

Turner impressed during a goal-scoring display in in February and Coleman revealed he would about playing for Wales.

The 6ft 4ins defender did eventually confirm his Welsh qualification but, with the help of Cardiff manager Malky Mackay, he told Coleman that playing for Wales was "not for me".

"I spoke to my family," added Turner.

"And I spoke to Chris Coleman through our gaffer because our gaffer wanted to help me through it because it was a situation, as a young professional, where I didn't want it to come across badly.

"The reason I turned down Wales is that I'm an English lad.

"I love playing for Cardiff and I really value the support I get from Cardiff but I must be honest to myself, if I played for Wales it would have been because I had been asked rather than growing up dreaming about it.

"There are lads who grow up dreaming about playing for Wales because they are Welsh and are born in Wales."