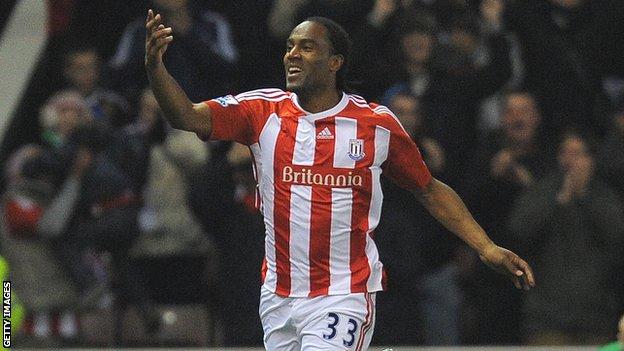 Stoke boss Tony Pulis has revealed that Blackburn Rovers have made an enquiry to take striker Cameron Jerome on loan.

Jerome, 26, has made just three substitute appearances in the Premier League for the Potters this season.

And Pulis would be prepared to allow Jerome to move to the Championship club on a temporary basis.

"It would be a good one for Cameron," said Pulis, ahead of Stoke's game against Sunderland. "He is the kind of player that needs game time."

However, Blackburn's - they have been without a permanent boss since Steve Kean's departure on 28 September - makes any possible move more complicated.

Pulis continued: "Eric [Black, caretaker manager] rang up to enquire about Cameron. It would be a three-month loan with a recall available after 28 days.

"But it's a bit awkward as Rovers don't have a manager at the moment."

Jerome and scored eight goals in 36 appearances for the Staffordshire club last season, although many of his starts came in domestic cup competitions and the Europa League.

This season, Peter Crouch and Jon Walters have been the first-choice pairing up front, while the continued presence of Kenwyne Jones and the summer arrival of Michael Owen has increased competition for attacking places at the Britannia Stadium.