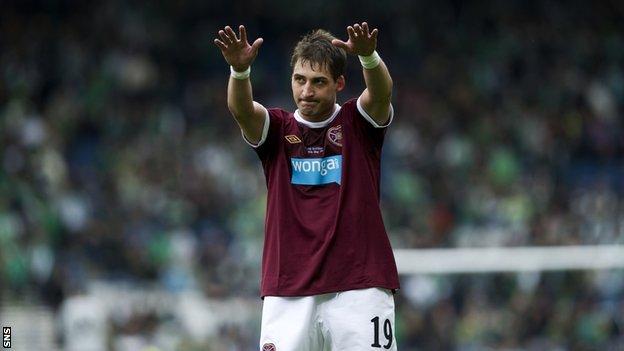 Dundee United have signed Rudi Skacel until the end of January after a possible return to Hearts for the 33-year-old Czech winger fell through.

Skacel, who left Hearts at the end of the season, had been training again at Tynecastle, but the Scottish Premier League has imposed a signing ban.

He told United's website: "For both the club and myself it is a good deal.

"In January, we can then look at things and see if it suits us both to extend the contract."

I feel Rudi can add an attacking spark to our team

Skacel's second spell at Tynecastle - he spent a year on loan from Marseille in 2005 - ended after two years with a 5-1 Scottish Cup final victory over Hibernian in May.

He could have signed again had the SPL not extended the signing ban, imposed on them for late payments to players, until December.

Now, with Saturday's SPL game against St Mirren being perhaps too early for a debut, Skacel could face his former club in Wednesday's Scottish Communities League Cup quarter-final at Tannadice.

"I can play a few games and hopefully help the team climb the table," he said.

"I am ready to be involved, but that will be the decision of the manager.

"Within 10 minutes of meeting the manager, I had decided I wanted to come here - it was an easy decision.

"I have kept fit training with a few of my previous clubs over the last few months, so it is just match fitness I have to get up to speed with."

Skacel has promised that, whichever club he joined next, he would wear the number 51 on his back in celebration of the Cup final victory in which he scored twice against Hearts' Edinburgh rivals.

United manager Peter Houston is delighted to secure the services of the midfielder who also played for Hertha Berlin, Panathinaikos, Southampton, Larissa and Slavia Prague.

"I feel Rudi can add an attacking spark to our team," he said of the former Czech international.

"Players of his quality do not present themselves to you too often and I am delighted to be able to bring him to Tannadice.

"The length of the deal gives both of us a chance to have a good look at each other.

"And I feel our younger, less experienced players will benefit from Rudi's involvement at the club.

"His goalscoring ability should make him a fans' favourite."

Hearts manager John McGlynn, speaking before news broke of Skacel's move to Tayside, insisted that the impact of the signing ban was limited because of the financial problems that have beset the club.

"We could sign players in August and we didn't do it, so it hasn't made a big difference to me," he said.

Meanwhile, Gregory Vignal's chances of winning a longer contract with United have suffered another blow.

The 31-year-old former Liverpool, Rangers, Southampton and Birmingham City full-back has yet to make his debut since joining United after exiting Atromitos and has picked up a hamstring injury that rules him out of the trip to St Mirren Park.