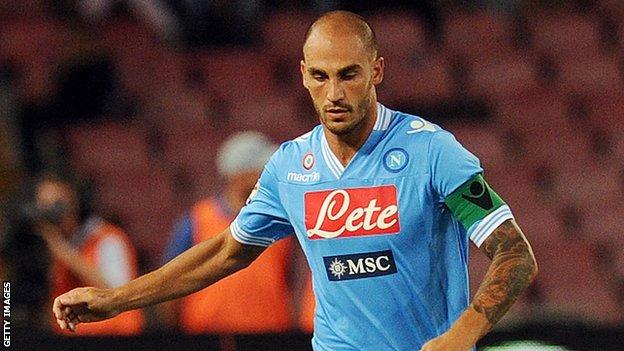 The Italian Football Federation (FIGC) is to open disciplinary proceedings relating to match-fixing at Napoli.

The charges refer to the Serie A club's 1-0 defeat against Sampdoria on the final day of the 2009-10 season.

The club, along with former goalkeeper Matteo Gianello and ex-coach Silvio Giusti, will now face a FIGC disciplinary committee.

Napoli defenders Paolo Cannavaro and Gianluca Grava have also been charged for failing to report the alleged fix.

A statement on the federation's official website read: "The FIGC can confirm that, following an investigation by the public prosecutor of Naples, the federal prosecutor will open disciplinary proceedings in relation to the Sampdoria-Napoli match of 16 May, 2010.

"Between them, they are accused of attempting to alter the outcome of the match to secure a victory for Sampdoria in exchange for money.

"[They are] also accused of having approached colleagues Paolo Cannavaro and Gianluca Grava, from whom they received a refusal."

A wide-ranging criminal and sporting probe into illegal betting and match-fixing in Italy has already led to several arrests and bans.

Juventus manager Antonio Conte was suspended for 10 months for not reporting match-fixing when he was in charge of Siena, then in Serie B, in the 2010-11 season.