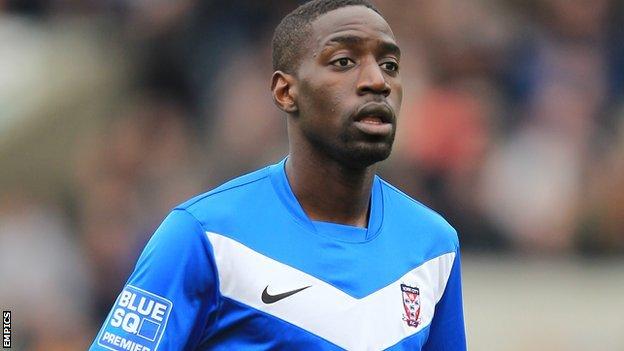 The 22-year-old summer signing from York City has featured mostly as a substitute for the U's this season.

But, having not even made the bench last weekend, new Cambridge boss Richard Money wants him to stay fit.

"It's important that players not featuring for us get match practice," said director of football Jez George.

"We saw the value of that earlier in season with Michael Gash's loan spell with Braintree.

"This is a good opportunity for Adriano to play some games. Richard Money and I are constantly reassessing the squad to see if further players can go out on loan if it is in everyone's best interests."

Having previously been on the books of Nottingham Forest and Leeds United, Moke joined the Minstermen in the summer of 2011 from the Glenn Hoddle Academy in Spain.

He made 34 appearances for York last term, as they clinched a return to the Football League via the play-offs.

Tamworth currently stand seventh in the Blue Square Bet Premier tables - nine places (and five points) ahead of Cambridge, who are due to host the Lambs during Moke's loan period on 17 November.

Moke is in line to make his first start in Saturday's home game with next-to-bottom Ebbsfleet.