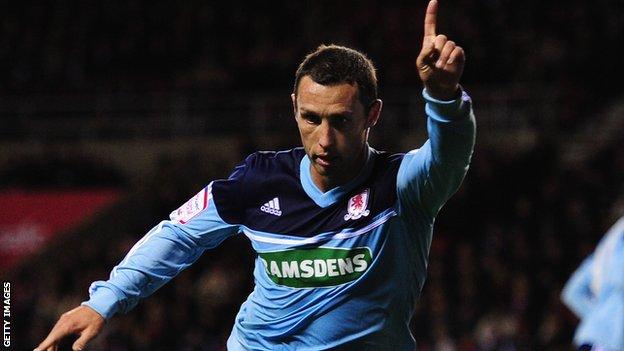 Middlesbrough climbed up to second in the Championship after recovering from going a goal down to win at Charlton.

Rob Hulse opened the scoring for the hosts with a goal from the edge of the area, before Boro defender Jonathan Woodgate headed in an equaliser.

Substitute Richard Smallwood slid in late on to complete the scoring.

Charlton have struggled at The Valley this season, and when Hulse fired beyond Jason Steele in the 12th minute, it was the first goal they had scored at home since the opening game of the campaign.

Chris Powell's side pushed forward in a bid to score a second, but instead it was Middlesbrough who equalised just before the half-hour.

Grant Leadbitter sent an inviting free-kick into the box and the unmarked Woodgate rose to direct a header into the net.

McDonald has been in dangerous form lately and he scored his fourth goal in three games eight minutes into the second half, racing through on goal before firing home from 12 yards.

The visitors scored again just after the hour mark as Steele launched the ball up the field for McDonald, who knocked it on to Ledesma and he smartly lobbed Ben Hamer from outside the area.

Lukas Jutkiewicz hit the post before Smallwood wrapped up the victory with a fourth for his side in the 90th minute.

Charlton manager Chris Powell: "We got hurt by a couple of individual mistakes in the first half then we were chasing the game in the second half.

"The scoreline doesn't really reflect what went on but they punished us in front of the goal.

"You want to perform at home, but also I think we can do better - there's more to come from the players but we haven't done that at home."

Middlesbrough manager Tony Mowbray: "We got confidence by coming from behind against Bolton last week and I thought we finished the game really strongly but it was a bit harsh on Charlton.

"As we know from last season, when you don't win at home for a time it becomes more difficult - the team feel that.

"We've got stronger in depth, when you consider we've got half a team not playing, and when you think last year we won two of our last 12 and missed out on the play-offs. We can't count our chickens."