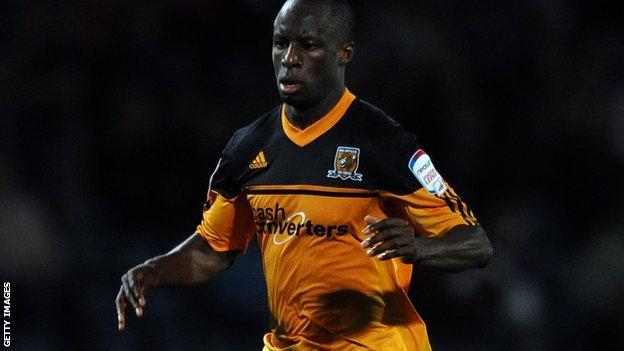 The Nigerian struck after 16 minutes when the Barnsley defence failed to clear their lines.

Steve Bruce's Hull were the better side throughout and came up against an in-form Luke Steele, who saved superbly from Corry Evans and Jay Simpson.

Barnsley's best chance fell to debutant Toni Silva who was unable to find the target with his shot.

The Tigers have now picked up four wins from their last five games to lie fifth in the Championship table, and the win was richly deserved despite the tight scoreline.

On the other hand, Barnsley look to be facing another battle against relegation. Having won just one of their last seven games, they have dropped to 20th in the table.

Aluko pounced early on as Ahmed Elmohamady's cross was only half headed clear by John Stones and the former Rangers man fired in a low drive for his fifth goal of the season.

Robert Koren could have extended the advantage but Steele parried his effort from the edge of the area, before denying Evans with a stunning save.

Former Liverpool winger Silva was sent on by Keith Hill to try to rescue a point for the Tykes, but he screwed his shot wide from Tomasz Cywka's pass.

Hull's victory means they have edged ahead of Barnsley in head-to-heads with 39 wins to 38.

"Aluko is a good player.

"Perhaps it has taken him time to develop and time to grow, but he's a naturally gifted footballer who has been great for us so far and could perform at the highest level.

"The better team won, thankfully, but we just needed a second goal, and that has been our Achilles heel at times this season."

"It pleases me no end (to be linked with the vacant Blackpool job).

"People might start respecting the job I'm doing on limited resources - and I mean really limited.

"It doesn't mean I'm interested, but I'm really pleased. It's very difficult on limited resources in the Championship where there's so much money swishing around."