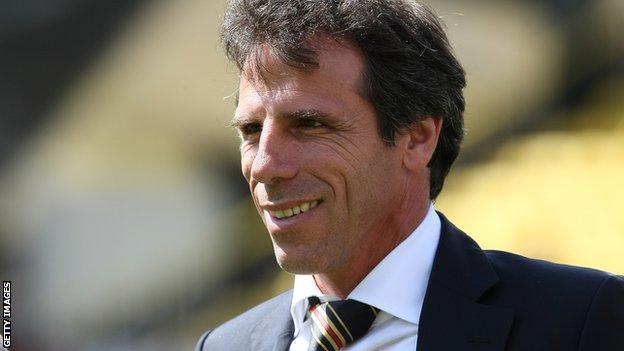 Watford sentenced high-flying Leicester to a second straight defeat as goals by Almen Abdi and Fernando Forestieri sealed a deserved win for the hosts.

Abdi, on loan from Udinese, put Gianfranco Zola's Hornets ahead with his fourth goal of the season.

Watford have yet to win consecutive home league games since Gianfranco Zola took charge in the summer. Their next home game is against Millwall on Tuesday

David Nugent reduced the deficit but Leicester finished with 10 men after Zak Whitbread was dismissed.

Former Norwich player Whitbread received his marching orders in the 83rd minute after being shown his second yellow card of the match.

Watford had lost their previous two Championship games but they found themselves ahead at Vicarage Road when a clever pass from Forestieri released Abdi on the right and the midfielder advanced towards Schmeichel before slotting a low effort into the bottom corner.

It took the Foxes until the 30th minute to create an opening, Ben Marshall forcing a save out of Manuel Almunia, before a powerful Wes Morgan header was cleared off the Watford line by Jonathan Hogg.

The hosts doubled their lead when Forestieri, also on loan from Udinese, pounced on the loose ball after Schmeichel pulled off a terrific 68th minute save to frustrate Pudil.

Leicester hit back when Nugent controlled Paul Konchesky's cross and fired into the corner of the net in the 71st minute.

But any hopes of a comeback vanished when Whitbread brought down substitute Matej Vydra and was shown his second yellow card of the game with seven minutes of normal time remaining.

"They made it very difficult for us, but there were times in the game where we played very well.

"I thought the first goal was excellent and the movement of the team was very good. After that, we kept playing good stuff but after 30 minutes they came back strong and they made it difficult.

"But fortunately we did not concede in the first half and in the second half we changed gear and we were slow until the end."

"That is two games running (we have lost) which is something we need to rectify relatively quickly.

"But what I would say is as a group of players, so far this season they have been excellent.

"On the face of it, yes it has been a tough couple of games where we have not performed well as a team. But the reason for this is because we have too many players who are not quite hitting the very high standards of performance that they have hit so far this season."