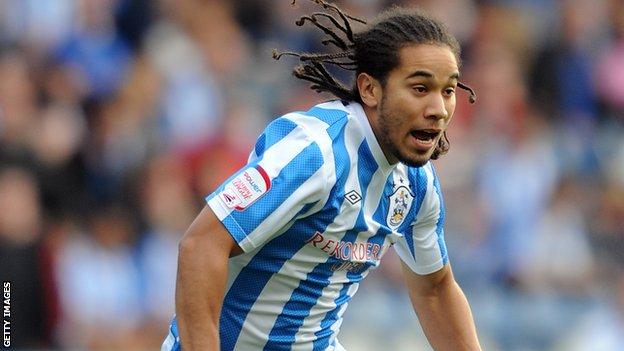 Huddersfield move up to seventh, while City remain in the relegation zone.

The home side were forced into making a number of changes for the game, with the suspended Jack Hunt and injured strike duo Jermaine Beckford and James Vaughan all out.

Scannell was one of the players to come into the side and he brought a quiet first half to life with a goal in the 43rd minute.

Novak cut the ball back from the left wing and Scannell raced in to rifle a shot beyond Dean Gerken from six yards.

The visitors were almost level before the interval as Cole Skuse's half-volley deflected off Peter Clarke, but the ball bounced wide.

Clear-cut chances were relatively few and far between in the second half, with Huddersfield's Adam Hammill shooting just over the bar, while City's Martyn Woolford saw a rising effort go over the goal.

The Robins continued to press and were only denied a dramatic late leveller when Smithies dived at full stretch to keep out McManus's effort.

Huddersfield manager Simon Grayson: "We have played better and not won but we needed to get back to winning ways. One bit of quality has won us the game.

"If our finishing had been more ruthless we wouldn't have been under the pressure we were in the last 10 minutes."

Bristol City manager Derek McInnes: "We've not been finding goals difficult to come by but they were in this game.

"We have not managed to be clinical enough and passed over some good opportunities.

"But the players deserve great credit for never giving up and this gives me great encouragement going forward."