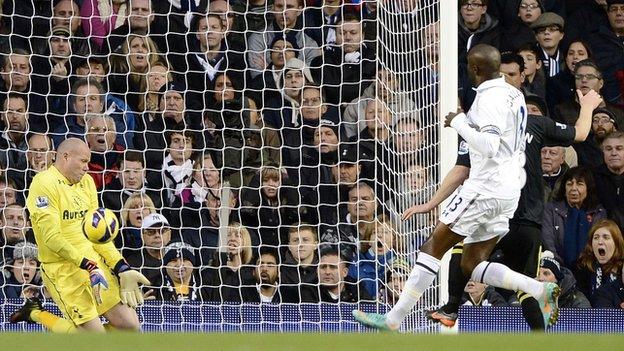 Tottenham suffered a shock defeat at White Hart Lane as Ben Watson scored the only goal of the game to give Wigan a second successive Premier League win.

The Wigan midfielder scored from close range early in the second half to give Roberto Martinez's side a famous win.

Spurs were booed off after what is a second straight home defeat, having failed to score in a Premier League game for the first time this season.

Spurs slip to fifth in the table, while Wigan move above Liverpool into 12th.

Few would argue that Martinez's side did not deserve the points. Wigan, the team who could not beat Bradford in the League Cup on Tuesday, overcame the might of Spurs with a first-half performance packed with flair and attacking verve and a second-half display that highlighted their many defensive qualities.

There was little comfort here for Andre Villas-Boas. In guiding Tottenham to five wins in six Premier League matches, the young Portuguese had gone some way towards winning over the many sceptics at his new club - not least those who booed their manager off at half-time against Queens Park Rangers a month ago.

But this result represents a jarring reality check against a side Spurs had been expected to beat, and beat well.

Three years ago Wigan had lost 9-1 here. They came back the following season to record a famous victory, the only home defeat Spurs suffered in the league that term. The brilliance of Gareth Bale decided last year's encounter in Spurs' favour, and few expected the sequence of results to continue as it did.

From the off, Martinez's side were sure-footed and progressive, carving out three clear-cut chances in the first half with their incisive passing and clever movement.

Tottenham's Brad Friedel was much the busier of the two goalkeepers, denying Shaun Maloney and Arouna Kone, who were tremendous throughout, with important blocks, before Watson fired over from the edge of the penalty area.

Tactically smart, Wigan's work-rate was also admirable, their players often doubling up on Tottenham's main threats, such as Bale. Jermain Defoe also had unwelcome company throughout.

After the break, Wigan battled for everything and dominated territory with their fast and fluent approach, taking the lead after Franco Di Santo forced a corner.

Maloney curled it wickedly under Friedel's crossbar and the American goalkeeper clawed it out but only as far as Watson, who thumped the ball across the line from close-range.

Wigan had scored 35 league goals since the turn of the year, but this was the first to have been scored by an Englishman.

White Hart Lane fell silent. The noise only built again when Villas-Boas threw Adebayor into the fray but there was anger and disbelief in the stands as it became clear the Togo striker was to replace Defoe, rather than play alongside him.

Spurs responded as Bale fired a shot that Al Habsi did well to turn to safety before James McCarthy cleared Steven Caulker's goalbound header off the line with a header of his own. A second successive home defeat in the Premier League was beckoning for the first time since September 2008.

Maynor Figueroa fizzed a free-kick narrowly wide of Friedel's goal but much of the pressure was coming from Spurs now, and Gary Caldwell and Ivan Ramis were leading from the front as Wigan threw bodies in the way of Tottenham shots.

Bale curled a free-kick narrowly wide in time added on but Wigan weathered the cold and Tottenham's late storm to hold on for victory.