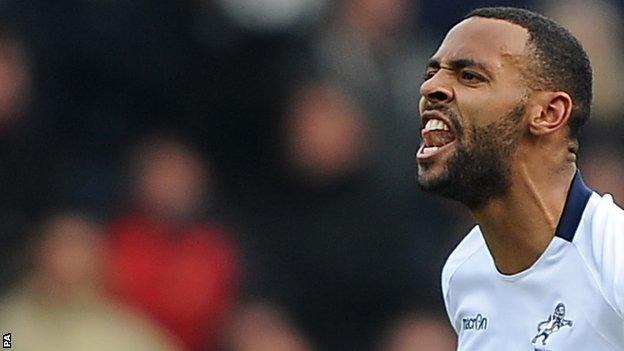 Liam Trotter's fine solo effort put the Lions ahead but Billy Sharp's 12-yard strike after a slick move made it 1-1.

The visitors regained the lead when Darius Henderson headed home a James Henry cross after the interval.

Millwall wrapped up the win to extend their unbeaten run to seven games through a deflected Chris Wood strike and substitute Andy Keogh's volley.

Forest's afternoon began badly when Trotter cut in from the left, beat two defenders and curled the ball into the top corner.

Sean O'Driscoll's Forest side grew in confidence and finished the first half on top but failed to add a second goal and the visitors took control after the interval.

Wood and Henry both sent headed efforts over the bar, before Henderson nodded Millwall's second goal past Camp from close range.

And the Londoners as good as secured their first sway league victory since August when Wood scored after a swift counter-attack with a strike that took a big deflection off Danny Collins.

The Reds, who were beaten for the first time in six games, were caught out again six minutes from time when Taylor's cross was volleyed home by Keogh.

Nottingham Forest manager Sean O'Driscoll: "We started poorly, we didn't start with enough focus, they came with a gameplan and we fell into the trap.

"We committed our own downfall really. We lost our discipline and shape in the last 10 minutes because we were trying to gamble really.

"We have to stick to what we have done really well. It is difficult in this division and the only certainties are that you are going to get beaten."

Millwall assistant manager Joe Gallen: "The important thing is for us not to get carried away with the win.

"It's a massive achievement to come to a place like this, score four goals and beat Forest.

"But while our fans and everyone connected with the club can feel pretty pleased with the way things have gone today, by tomorrow it will be all over."