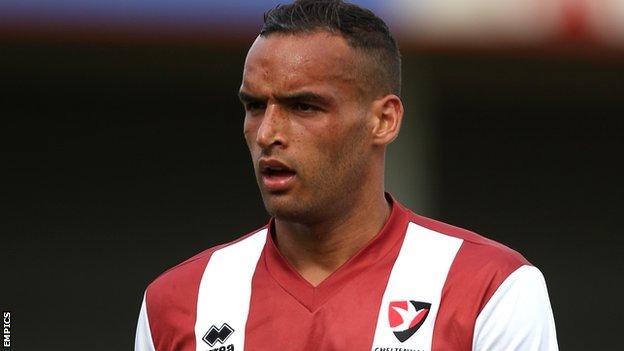 Cheltenham held off a spirited Yate side to progress in the FA Cup.

In a thrilling opening exchange, the Robins took the lead when Tom Warren's clearance hit Bluebells team-mate Scott Thomas and rebounded into the net.

Non-league Yate saw efforts from Tom Knighton and Jake Cox hit the woodwork as they pushed for an equaliser.

Mohamed headed in Billy Jones's corner and substitute Chris Zebroski added a third late on to send Cheltenham through to the second round.

Yate, who play in the Southern League Division One South and West and sit 110 places below their opponents in the football pyramid, did have the ball in the net in the first half but James Harmer was ruled offside.

"I felt we limited them to very few opportunities, but they kept playing, trying to pass the ball and they can take massive credit in that.

"We always had more gears to step up to and their keeper made a lot of good saves today.

"The early goal helped settle us. We got good set piece delivery to score again, and we wasted chances to score more."

"We didn't let our heads go down even if we thought it was going to be one of those days.

"We showed character to play our way back in to the game and maybe could have nicked a goal.

"The fans were out-singing the Cheltenham fans and that was pretty special.

"They were absolutely fantastic and the ovation at the end was fantastic. The lads didn't let them down."