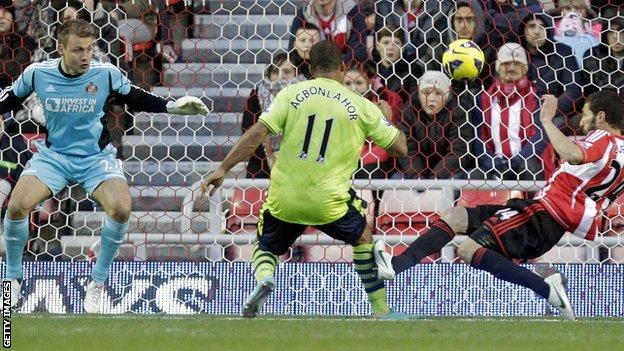 Gabriel Agbonlahor ended his run of 28 league games without a goal by scoring Aston Villa's winner at Sunderland.

The striker broke the stalemate when he stabbed in from close range after a knock-down from Christian Benteke.

Sunderland wanted a penalty when John O'Shea's glanced header struck the arm of Benteke but the referee waved away their appeals.

Louis Saha headed a late Sebastian Larsson cross agonisingly over for the home side but Villa held on.

A handful of Sunderland fans had begun to make their way out of the stadium after Saha's chance as they did not expect the top flight's lowest scoring side, with six goals, to equalise - and they were proved right.

The defeat ended a week in which the struggling Black Cats were knocked out of the Capital One Cup by Middlesbrough and they have now won only once in their last 17 games.

For Villa, on the other hand, this was a first league win in 14 away games since January and, after they reached the last eight of the Capital One Cup in midweek, their latest success will provide more encouragement for Paul Lambert.

Lambert's side gave him only his second Premier League win as Villa manager and helped him come out on top against his mentor, Sunderland boss Martin O'Neill, who managed him for five years at Celtic.

"Aston Villa boss Paul Lambert has put one over his mentor and Sunderland manager Martin O'Neill. That is the lift Aston Villa badly needed but O'Neill has been beaten by his former club and Sunderland have only one win in their last 17 matches."

Although there is plenty of respect between the pair, this was a game in which both men were desperate for three points.

Sunderland thought they had scored in the opening minutes when Steven Fletcher, who has scored five of his side's six league goals this season, dinked a Stephane Sessegnon pass over keeper Brad Guzan, only for the the effort to be correctly ruled out for offside.

Lambert's side produced some promising play and delivered a warning of the goal that was to come when Agbonlahor latched on to Benteke's knock-down before having a shot deflected high off Bardsley.

The home side's playmaking trio of Sebastian Larsson, Sessegnon and Adam Johnson have struggled to make their presence felt this season and they were again frustrated.

After Sunderland skipper Lee Cattermole curled a strike a yard wide, a Larsson shot went out for a throw-in, perfectly illustrating the problems O'Neill's side have had in front of goal.

The Black Cats stepped up the pace of their game after the break but it was Villa who took the lead.

A right-wing Matthew Lowton cross was nodded down by Benteke and Agbonlahor was on hand to divert the ball past keeper Simon Mignolet.

Sunderland had a shout for a penalty when Johnson's cross was flicked on by John O'Shea before coming off the arm of Benteke, although referee Mike Jones did not point to the spot.

Saha headed over for the home side, who left themselves vulnerable on the counter-attack as they pressed forward.

Villa's Andreas Weimann had a shot saved by Mignolet and, although Sunderland went close with another Cattermole shot and a Fraizer Campbell header, the home side's effort was to no avail.