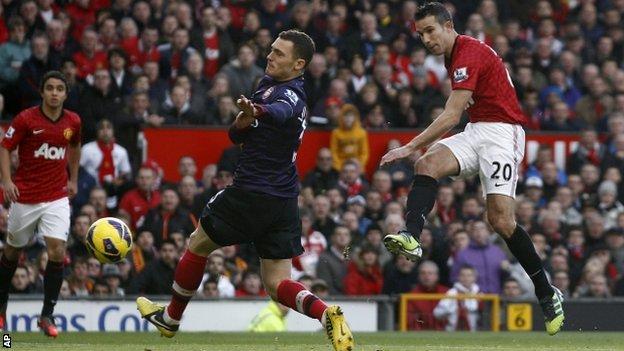 Robin van Persie provided a painful illustration of what Arsenal are missing as he set Manchester United on the way to a comfortable win against his former club at Old Trafford.

The striker - who received a hostile reception from the fans who once idolised him, following his £24m summer move from Arsenal to United - was on target inside three minutes with his 10th goal of the season.

Robin van Persie has now scored against all current Premier League clubs. Only one other player has done this - Yakubu

United were in such command that they could even afford a missed penalty from Wayne Rooney before Patrice Evra wrapped up the victory with a second-half header.

And to make matters worse on a miserable day for Arsenal and manager Arsene Wenger, Jack Wilshere was sent off with 20 minutes left after receiving a second yellow card from referee Mike Dean for an overzealous challenge on Evra.

Santi Cazorla pulled a goal back for the Gunners with the final kick of the game but the scoreline was not a true reflection of United's obvious supremacy in all areas.

The result put United top of the Premier League with three points collected with the minimum of fuss in the 44th meeting between Wenger and his great adversary Sir Alex Ferguson.

For the visitors, defeat leaves them with 15 points from 10 games, their worst start to a Premier League season under Wenger. It may not have been the humiliation of last season's 8-2 thrashing at Old Trafford but Arsenal's manager will struggle to take any positives from this performance.

Arsenal's visiting support made their contempt for one-time hero Van Persie clear when his name was announced before kick-off - but the Dutchman was soon punishing his former club as he put United ahead early on.

Thomas Vermaelen set the tone for a poor display with a bad clearance that sent Rafael's cross straight into the path of Van Persie, who did not hesitate before sending a low right-foot finish past keeper Vito Mannone.

It was a goal scored in close proximity to Arsenal's fans but Van Persie declined to milk the moment and his celebration was muted as he was mobbed by delighted team-mates.

Van Persie almost added his second when he was played in by Rooney's angled pass but his powerful rising shot was well saved by Mannone.

Arsenal were struggling desperately, a problem exemplified by the hapless Andre Santos's woeful attempts to defend their left-flank in the face of the pace and penetration of Antonio Valencia.

Mannone, at least, was distinguishing himself and he did well again to block from Rooney as United continued to dominate.

There had been little for Arsenal to cling to in a dismal first half but they were at least given some hope as half-time approached. Referee Dean awarded a penalty after Cazorla raised his arms to block Ashley Young's cross. Rooney stepped forward to take the kick but missed his seventh penalty out of 20 in the Premier League by shooting low and wide.

Theo Walcott, surprisingly only named as substitute after his hat-trick in the 7-5 Capital One Cup win at Reading in midweek, finally entered the action after 51 minutes as a replacement for Aaron Ramsey after the Welshman injured his groin. It was the signal for the visitors to threaten at last, Olivier Giroud striking the outside of the post from an acute angle.

Valencia had missed an open goal from Van Persie's pass seconds after the break and the Netherlands striker was also thwarted by another fine stop from Mannone - but it was a brief reprieve for Arsenal.

Rooney took possession of a short corner and the diminutive Evra found space among Arsenal's defenders to head comfortably past Mannone after 67 minutes.

The Gunners' plight worsened moments later when Wilshere, who had been combative throughout, was shown a second yellow card for a foul on Evra. He could have no complaints although his fate was in sharp contrast to Tom Cleverley, who was hastily removed by Ferguson as he ran a similar risk for a tackle on Wilshere following an earlier booking.

Cazorla's fine curled finish provided nothing in the way of consolation for Arsenal as this performance demonstrated just how far they have to travel before they can even consider themselves title contenders once more.