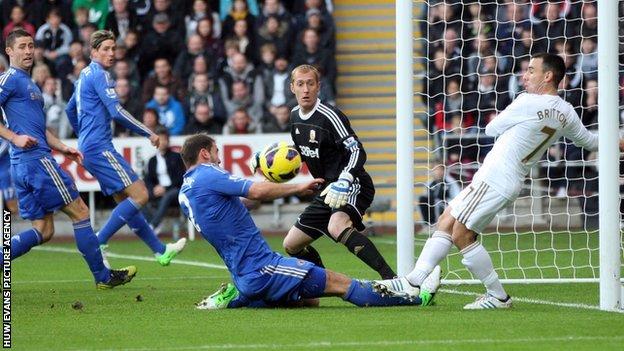 Chelsea failed to regain top spot in the Premier League from Manchester United as they conceded a late equaliser at Swansea.

Victory looked a formality for Chelsea as they protected the lead given to them by a flicked Victor Moses header.

But Pablo Hernandez beat Petr Cech from the edge of the area two minutes from time to rescue a point for the Swans.

Hernandez's goal gave Chelsea no time to react and ended an unsettling week for the Blues following their accusation of "inappropriate language" against referee Mark Clattenburg in last Sunday's 3-2 defeat by United.

The home side were often better in possession than the visitors, but their lack of incisiveness in the final third gave no reason to suggest a late rally was on the cards.

Chelsea lacked both the authority or guile of potential champions, although they looked to have done enough to return home with three points and reclaim top spot following United's earlier victory over Arsenal.

But they were caught with a classic sucker punch as Swansea followed Wednesday's Capital One Cup win over Liverpool with another impressive result.

Chelsea carved out most of the limited scoring opportunities, the first of which came on 12 minutes when Leon Britton cleared a glancing Fernando Torres header off his own goal-line, providing a perfect example of the value of having a man guarding the far post.

Britton would have been helpless, though, had a sliding Branislav Ivanovic managed to stretch an inch further to divert the ball in from two yards.

Torres, returning from suspension, might have done better with another header after a driven Moses cross was deflected into his path.

Ashley Williams looked back to his commanding best in marshalling the Swansea defence, aided by a lack of any great movement from the Chelsea front men.

Such was the visitors' lack of invention it was early in the second half before Swansea goalkeeper Gerhard Tremmel was forced into his first save of note, diving low to keep out Eden Hazard's drive.

A more spectacular saved followed from Hazard's free-kick, but the resulting corner delivered the opening goal.

Cahill rose well to divert a header towards goal, and Moses was in the perfect position to flick the ball home from inside the six-yard box, giving him his first league goal on his first league start since his summer move from Wigan Athletic.

Cech was almost a complete spectator in the Chelsea goal and was only forced into action in the final quarter to save long-range efforts from Jonathan de Guzman and Nathan Dyer.

But he was beaten at full stretch with two minutes remaining when Hernandez produced a rare moment of quality to find the corner of the net with a curling effort from the edge of the box.

A re-energized Swansea pressed for an unlikely winner and Cahill had to be alert to save Chelsea from further misery as he blocked Danny Graham's goalbound effort.