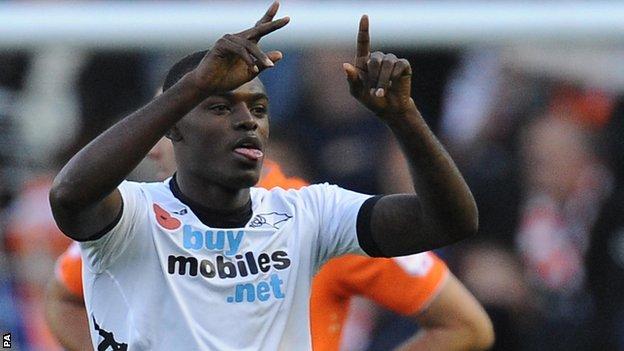 Blackpool's first game since the departure of Ian Holloway as manager ended in a heavy defeat at Derby.

Theo Robinson fired the Rams in front when he converted a Paul Coutts cross, and a long-range John Brayford strike added to Derby's lead.

Tom Ince scored a penalty after a Richard Keogh handball to pull one back for the visitors.

But Robinson surged into the box and slotted home before Conor Sammon tapped in to complete the scoring.

Holloway was earlier in the day and Steve Thompson took caretaker charge of the Tangerines.

But Thompson, who would like the job on a permanent basis, looked on as the Rams quickly took a grip on the game through Robinson's strike.

The Rams extended their lead when Coutts found Brayford, who powered in a 25-yard strike past keeper Matt Gilks.

Ince scored for the visitors from the penalty spot after a Matt Phillips shot was adjudged to have struck the hand of Keogh.

The delivery of Coutts was a major weapon for the Rams and he crossed for Sammon to seal the victory with a Derby fourth.

"[Theo Robinson] was on a hat-trick so he wasn't exactly chuffed about it [when I substituted him].

"But he had been carrying a bit of a strain in training and with a game here against Barnsley on Tuesday it made sense to bring him off.

"If he's disappointed about it, he can score a hat-trick against them.

"It was the complete performance, exhilarating. We did everything right to take advantage of a difficult situation for Blackpool."