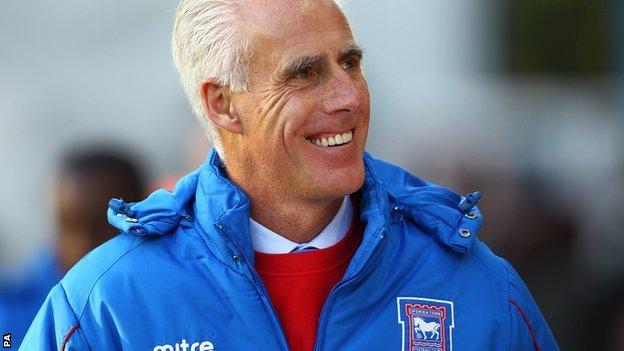 Nikola Zigic missed two glorious chances for the home side, wasting a header before shooting straight at goalkeeper Stephen Henderson.

Despite the win, Ipswich remain bottom of the Championship table.

It was a highly satisfactory start for former Sunderland and Wolves manager McCarthy who replaced Paul Jewell during the week.

Having picked up only one league win this season - against Watford in August - the Tractor Boys doubled their tally with an efficient performance over a lacklustre Birmingham side.

Lee Clark's men were looking to make it back-to-back wins for the first time this season, but were booed off at full time and remain 17th with 16 points from 14 games.

The away side punished Birmingham with the only goal of the game when youngster Nathan Redmond lost possession in the middle of the park and Campbell reacted brilliantly to turn the ball past Jack Butland.

Town could have doubled their lead when Daryl Murphy's shot was pushed away by Butland, and he saved again from Lee Martin.

The hosts pushed forward in search of the equaliser and Marlon King had an effort tipped over by Henderson, before Clark sent on substitute Zigic.

The towering Serb should have found the net from an inch-perfect King cross, and again found himself in space in the box but was unable to find a way past Henderson as Ipswich held on to win at St Andrew's for the time since 1986.

"We're creating a negative attitude around the stadium with our first-half performance.

"We're starting (home) games - certainly Barnsley, Huddersfield and today - so flat that the crowd become apprehensive and a bit bored to be honest with you because they're not getting dished up any quality or drive.

"Then they do it in the second half. But why? Why not do it from the first whistle?

"I hate changing the team around but I've got to have players who are playing consistently well week in, week out home and away."

"My last game was a defeat (as Wolves boss in February) and I didn't want to start with one.

"I thought the players gave everything. We had some blocks, there was a great save at the end. I though their goalkeeper made a great save from Danny Higginbotham.

"All in all it was a fairly even game, I think we deserved to win it and the block and the save at the end earned it for us."