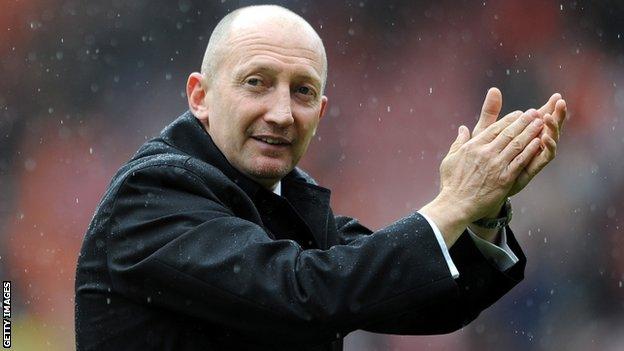 New Crystal Palace manager Ian Holloway watched from the stands as his new club climbed to third in the Championship table.

Glenn Murray scored either side of half-time to condemn new Blackburn boss Henning Berg to defeat and extend Palace's unbeaten run to 11 matches.

Palace striker Murray headed in Owen Garvan's cross late in the first half, before scoring a 60th-minute penalty.

The defeat leaves Blackburn sixth in the table.

And they have now won only one of their past seven away matches in the league.

While Holloway, who was confirmed as Dougie Freedman's replacement on Saturday, will have been impressed by what he saw, Berg, who himself only took charge on Wednesday, will have been left in no doubt as to the magnitude of the task he faces.

The prospect of playing an in-form Palace outfit, whose last defeat came in August, was daunting enough for Rovers, but the hosts had an extra incentive with the watching Holloway assessing his new side.

It was, however, Blackburn who almost broke the deadlock first. An outswinging corner from Morten Gamst Pedersen was met by Dickson Etuhu but his header crashed back off the crossbar.

Garvan's cross from the right found an unmarked Murray in the six-yard box and he guided his header into the net via the underside of the crossbar.

Holloway was given a rousing reception as he introduced himself to the home support on the pitch at half-time and Palace continue to dominate after the break.

Wilfried Zaha was at the heart of everything but it was Murray who drew Grant Hanley into committing a foul inside the box which referee Lee Probert saw as a clear penalty.

Murray stroked the ball beyond Blackburn goalkeeper Paul Robinson and the striker could have completed a second hat-trick of the season six minutes later, again from the penalty spot, when Adam Henley fouled Bolasie, but Robinson saved the spot-kick.

Blackburn substitute Ruben Rochina was twice denied by the woodwork as Palace rode their luck in registering their first clean sheet at home this term.

Crystal Palace caretaker manager Curtis Fleming: "The players were fantastic. I think they should be playing with confidence but we should concentrate on what we do and not get carried away. Everyone has to work hard.

"Ian Holloway came in before the match. We have a video presentation at 1.15 at home games so he came down just before that to introduce himself.

"He was lively, as he is, and I think the lads quite enjoyed it and they will quite enjoy working with him."

Blackburn manager Henning Berg: "It was neither the performance nor the result we would have liked.

"We had a bad performance and I think we can be much better than this. It is a fresh start. I don't know everybody 100 per cent yet.

"It's a good squad we have here but there is room for a lot of improvement and we will do that. "I have seen this team play much better than they did today so hopefully it is a one-off."