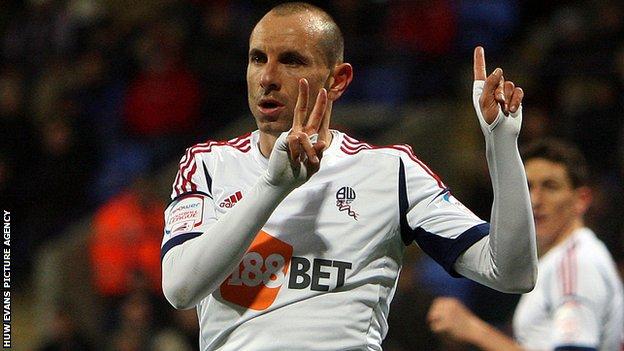 Dougie Freedman marked his first game in charge of Bolton Wanderers with a comeback victory over Championship leaders Cardiff City.

Craig Noone put Cardiff ahead late in the first half after Bolton failed to clear Peter Whittingham's cross.

The former Liverpool striker collected two yellow cards in the final seven minutes, but the home side held on despite almost eight minutes of added time.

Cardiff, faultless at home with seven wins from seven, have now suffered three defeats from four on their travels, but they retain their place at the top of the table on goal difference.

Freedman had come from behind to beat Cardiff earlier in the season while manager of Crystal Palace, and the new boss can take much of the credit for changing the course of this game.

The introduction of Petrov and Ngog gave Bolton much-needed impetus after a poor first half that ended with Noone's goal for Cardiff.

Whittingham's far-post cross caused the confusion, with home defender Zat Knight only able to head high in the air.

The ball fell perfectly for Noone, whose low left drive went through the legs of Knight and Stephen Warnock on its way past the unsighted goalkeeper Adam Bogdan.

Bolton were transformed after the break and Ngog was wrongly denied a legitimate goal when his low drive was ruled out for offside.

But the home side were rewarded from the resulting corner when Kim was adjudged to have clipped the heel of Ngog, despite the Cardiff midfielder's best effort to pull out of the challenge.

Petrov dispatched the penalty to the bottom left corner with authority.

Bolton were now firmly on top, and the winner soon arrived, giving Ngog his first goal of the season.

It was the faintest of touches from the Frenchman, deftly diverting Sam Ricketts' low drive into the net from six yards with his back to goal.

Noone went close on several occasions for Cardiff as he cut in on his left foot from the right wing, before the visitors appealed in vain for a penalty in stoppage time as Warnock tussled with Mark Hudson.

Goalkeeper David Marshall, up for a last-minute corner, then almost snatched a dramatic equaliser but his effort on the turn deflected over the bar after hitting Bogdan's face.

Bolton Wanderers manager Dougie Freedman said: "I learnt today that this team can respond from setbacks and not just put their heads down when things

aren't going right for them.

"We've got a group of players in there who are up for the challenge and this is a team that I think will play in the Premier League.

"It was difficult to take being 1-0 down at half-time, but it was a terrific response from our players after the break."

Cardiff City manager Malky Mackay said: "Do I feel hard done by? In a word, yes.

"Bolton had to come out and have a go in the second half and they got a penalty from nothing.

"David Ngog dived before he was even touched so if he gives that he has to give us a penalty with Hudson.

"I certainly hope the referee and the linesman look at their performances because neither of them were good enough tonight.

"They had a goal which could have been given but the standard of officiating overall was not good enough.

"It has ultimately cost us the game and that could prove to be vital at the end of the season."