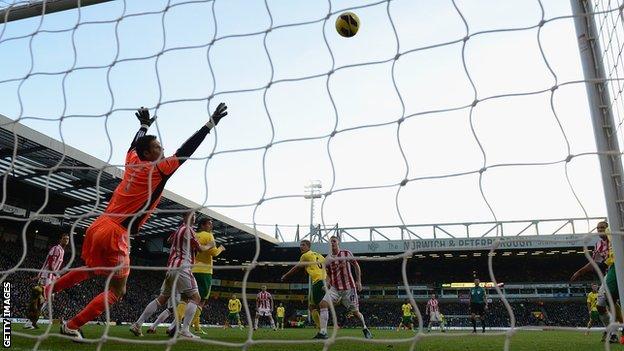 Johnson guided the ball in from a controversial Robert Snodgrass free-kick at the end of a turgid first half.

The visitors improved after the break and Kenwyne Jones wasted a good chance.

But Stoke never looked like securing a first away win since January and the Canaries held on to climb above the Potters in the table.

Norwich's recent resurgence has seen them win two of their last three Premier League games and move a point ahead of Stoke with 10 points from 10 games.

Stoke have only registered one Premier League victory this season, have scored only eight goals in 10 games and have not won away from home in 15 league matches

And they were good value for the victory, albeit from a tame game in which Stoke only seriously threatened during a nervy finale.

Having followed up last Saturday's impressive draw at Aston Villa with a battling - if slightly fortunate - win over Tottenham in the Capital One Cup in midweek, the Canaries had good reason for optimism against a side who had failed to win in 14 away Premier League fixtures.

The Potters and their ever-bullish manager Tony Pulis would have argued that statistics can be deceiving.

Stoke have already played both Manchester clubs, as well as Arsenal, Chelsea and Liverpool, so the fact they have only lost two league matches this term was probably the more noteworthy pre-match fact.

But on this form it was plainly obvious as to why the visitors have drawn so many games.

Although constantly - and often very harshly - criticised for a long-ball, football-by-numbers approach, Stoke seemed to lack the dynamism, creativity and ambition in attack.

In Charlie Adam they have a player with undoubted quality, but he was rarely involved and their lack of adventure meant he had their only worthwhile efforts on goal in the first half.

The midfielder shot narrowly wide with the first, a clever curled effort from 25 yards after a poor defensive clearance, and he then fired another long-range strike straight at keeper John Ruddy.

But despite a decent spell in the latter stages of the opening period, it was Norwich who made most of the first-half running.

Wes Hoolahan, who excelled against Villa last week, was unsurprisingly at the centre of nearly all the home side's good work.

He was busy and dangerous throughout and teed up Anthony Pilkington, whose close-range strike was well kept out by the feet of visiting goalkeeper Asmir Begovic.

That was the best opening of a listless first half until Johnson rose brilliantly to head home Snodgrass's inviting free-kick from the left.

Stoke, who have now not won away from home in the league since beating Blackburn in January, felt the set-piece award was harsh and also that they should have had their own free-kick in the build-up for a foul on Adam.

Pulis remonstrated with referee Andre Marriner at the interval but perhaps his main frustration was with his own side.

"It's seven points from the last three Premier League matches for Norwich now. Bradley Johnson's goal was the difference in a match that was sadly lacking many highlights. Stoke's long search for an away league victory continues - their last success coming on 2 January against Blackburn Rovers."

The Potters improved on the resumption, but they still struggled to create chances despite spells of pressure.

Jon Walters should have done better when presented with a one-on-one chance but shot straight at Ruddy.

And substitute Jones could only send an excellent headed chance at the keeper, and then wasted an even better opening when he pulled a shot across goal from 12 yards.

But Norwich defended resolutely and were able to withstand the pressure and claim only their second league victory of the season.

"You cannot be too disappointed when you have won, but we could have made life better for ourselves.

"We needed to put a little more pressure on them. We could have done better when we had the ball and had two very good chances apart from scoring the goal. We should have pressed more, but that takes a lot of energy, especially when you are playing against a team like Stoke.

"But I thought we dealt with it very well and apart from Kenwyne Jones' header we restricted them to a couple of half-chances."

"The goal was a disappointment. I have been in to see the referee to have a quick chat. I thought it certainly was not a free-kick, and the disappointing thing is when the lad falls, Andre [Marriner] and the linesman are so close to it.

"He has booked Charlie in the first half for diving - I have just had a look at that and Javier Garrido pushes him in the back, so that is a double kick in the teeth when he gets both those decisions wrong and even worse when they score from it.

"Referees give the decisions they see on the day, and he has seen it differently to what we have. When he sees it again on the television, he will have a different opinion.

"Asmir Begovic did not really have many saves to make and in the second half, I thought we played like the home team. We had the two best chances of the game, and they have got to be scored. It is disappointing to come away with nothing."