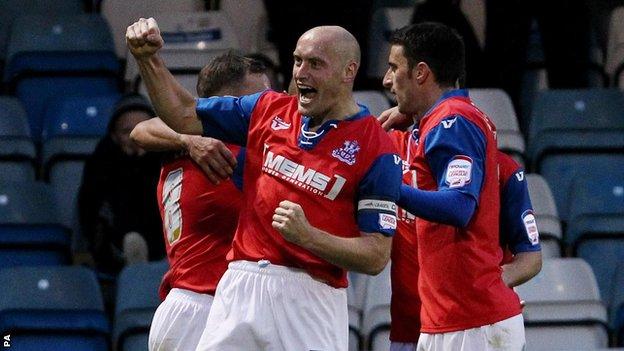 League Two leaders Gillingham knocked League One side Scunthorpe out of the FA Cup with an easy win at Priestfield.

The Gills went ahead when Matt Fish finished after Sam Slocombe could only parry Chris Whelpdale's curling effort.

Deon Burton headed in from Myles Weston's cross for 2-0 before Danny Kedwell's penalty, after Josh Walker's foul on Danny Jackman, made it 3-0.

Adam Birchall bundled in a late fourth as Brian Laws's third spell in charge of Scunthorpe began with a heavy loss.

Gillingham had gone into the match knowing little about their opponents as scout Russ Wilcox, who had been studying the Iron for the Gills, joined Scunthorpe's staff on Friday.

"I'm very proud. We expected them to be hard to beat, and hard to break down, but in the second half we had far too much passion, power, pace, quality. We played some great football.

"Once we got the ball moving around, there was only going to be one winner.

"Their first chance was in the 88th minute, which tells you a lot about the people we've got in our squad."