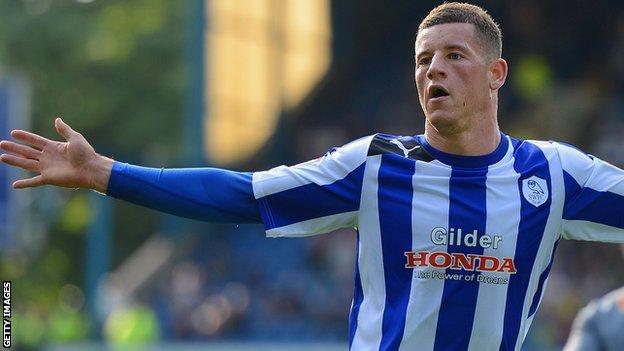 Sheffield Wednesday earned a first home win since August as they beat Peterborough at Hillsborough.

Ross Barkley put the Owls in front when he latched on to a Chris O'Grady flick-on straight after half-time.

Peterborough were given hope when George Boyd struck from 18 yards, but the home side held on for the win to overtake the visitors in the table.

Posh had won their last two games but drop to third from bottom.

Wednesday started the game with intent, Barkley seeing an early effort turned around the post by visiting keeper Bobby Olejnik, but it soon became an uninspiring affair before Barkley opened the scoring in the first minute of the second half.

Peterborough hardly forced a save out of keeper Chris Kirkland and found themselves 2-0 down when Llera headed home from six yards for his third goal of the season.

Boyd's effort might have given the Owls some concern but they saw out a second successive win.

"The day was dull, everything about it was dull and well done to the crowd because second-half they got us going a little bit because it was just such a low-tempo game.

"There was not a great deal happening but sometimes you get those games and you've got to make sure you come out on top and that's what we did second half.

"We've probably played far better than that and come away with nothing so that's how it goes sometimes.

"I was glad they put the lights on, it was just such a dull day."