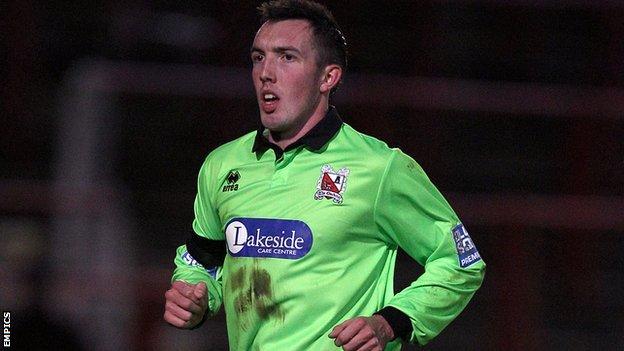 Will Evans cashed in on a defensive shambles to fire the Bulls ahead from 12 yards after just three minutes.

Bowman doubled their lead with a 25-yard right-foot screamer before Luke Summerfield pulled one back from a disputed low free-kick.

Turner was named Hereford manager in 1995 and became owner and chairman three years later. In 2010, he left Edgar Street to become Shrewsbury boss

But ex-Bulls supremo Turner's misery was complete when Bowman was fouled by Lee Collins and scored the penalty.

Apart from the much-heralded return of Turner to cash-strapped Hereford, four of his team - Collins, Darren Jones, Rob Purdie and Paul Parry - were also up against their old club.

But, on a ground where Turner had recorded 2-0 wins on his two previous league trips back with Shrewsbury, it was the current crop of Hereford players who ended up outshining their Edgar Street predecessors, as the League One side flopped badly on the day against their Blue Square Bet Premier hosts.

Town keeper Chris Weale had already made an early save from Harry Pell before Evans was allowed an absurd amount of time inside the box to fire Town's opener.

And, although Town top scorer Marvin Morgan's left-foot shot hit the Bulls' right post, Bowman then doubled Hereford's lead before the home side twice more went close through Evans, on the angle from 12 yards, and Sam Clucas's long-range effort.

Summerfield gave Town hope when he drilled his free-kick into the bottom left corner after Pell was adjudged to have fouled Asa Hall.

And, after Jon Taylor and Darren Jones went close for the visitors, Summerfield then went close to equalising on 59 minutes when his right-foot shot clipped the outside of the right post.

But, when Bowman went down under a challenge from Collins on 72 minutes, referee Gary Sutton adjudged that it was a penalty - and the Bulls top scorer fired his ninth goal of the campaign to book his team's place in round two.

"There was probably more pressure on us in the previous round against FC United. But this was still an important win for us as a club.

"There's been a lot of doom and gloom about. Telling the players before the Southport game that they weren't going to get paid was hard, but this might just have taken us to the right side.

"There's still loads of work to do. But there was a good crowd, a good atmosphere and the boys certainly played a part in it.

"The first 20 minutes we were out of the box and Ryan Bowman led the line exceptionally up front for a 20-year-old. The ref then gave them the lifeline with a free kick which was never a foul, but we dug in and when they came at us in the second half our back four were fantastic."

"You can't give two-goal starts, no matter what standard the team you're playing. It lifts the crowd, it lifts the players, we go down a notch or two and we're chasing the game after that.

"We've had a bit of bad luck with the penalty decision and we've hit the woodwork twice but that counts for nothing.

"It was defensively a very poor performance. We're leaking goals, we're out of the FA Cup and it's devastating.

"It's a local derby and I'm sure the Shrewsbury supporters will be hurting going back up the A49 - but not half as much as me."