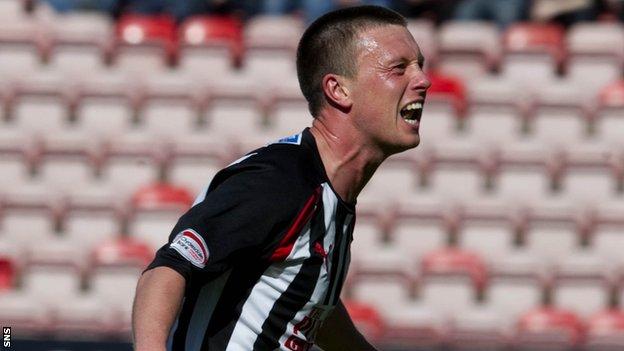 Dunfermline Athletic have a match steward to thank for being able to complete a Fife derby win that took them to the top of Division One.

Referee Kevin Clancy was injured in a collision with Cowdenbeath boss Colin Cameron and the second half was delayed as a replacement was sought.

A qualified official came forward from the security staff.

And the Pars went on to win thanks to a Jo Cardle strike, a John Armstrong own goal and a Craig Dargo tap in.

With a linesman replacing the referee following a 30-minute delay, 61-year-old G4S supervisor Jock Campbell, from nearby Rosyth, volunteered to take over the assistant referee duty at East End Park.

A G4S spokeswoman said Mr Campbell is a qualified referee and regular official at Sunday league matches. She said he was happy to step in when the call came out.

The win puts Dunfermline ahead of Partick Thistle, who were held to a 0-0 draw away to Falkirk, on goal difference.

Dunfermline dominated proceedings early on but were made to wait until the 28th minute for their opening goal, when Cardle slotted home from 18 yards.

Cowden goalkeeper Thomas Flynn made a smart save from Stephen Husband's penalty on the half hour after Armstrong fouled Ryan Thomson in the box.

The visitors were then dealt a blow when the in-form stopper had to leave the field injured just before half-time.

Dunfermline finally got their second when Armstrong scored an own goal in the 77th minute.

Dargo finished from close range in the 84th minute to make it 3-0 and cap a powerful Dunfermline display.