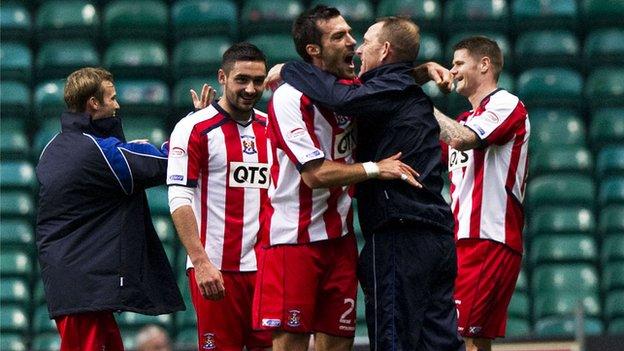 Kilmarnock manager Kenny Shiels paid tribute to midfielder Liam Kelly after his side won at Celtic Park for the first time in 57 years.

Kelly, who scored goal the second in a 2-0 win, was unable to celebrate when Killie beat Neil Lennon's team in the League Cup final earlier this year as his father died during the closing stages of the game.

"It was befitting that he scored the second goal. It was a very emotional time for Liam and the club back in March," said Shiels.

Kilmarnock lifted the League Cup but were unable to celebrate due to the circumstances surrounding the game and 56-year-old Shiels felt that Saturday's match was important to his players.

They were fresh and fit, we were still hungover from the St Johnstone game

"The person I'm most pleased for is Liam Kelly," said the manager.

"We never really got a chance to celebrate the last victory against Celtic at Hampden and it was a really euphoric occasion.

"I just said to the boys, let's have a really good night and celebrate for Liam Kelly."

Kilmarnock went ahead when former Celtic striker Cillian Sheridan rounded Fraser Forster in the first half and manager Shiels was delighted with his team's performance.

"There's no such thing as perfection, but that was pretty close to it in how we organised and how we set up," he said.

"The best way to sum it up is the nullification of a quality team - Celtic, we have to remember, have just come off the back of playing Barcelona and a fantastic performance.

"They were fresh and fit, we were still hungover from the St Johnstone game, when we lost James Fowler."

Kilmarnock had not beaten Celtic away from home since December 1955, in more than 60 matches, a record the Northern Irishman was keen to end.

"I really want to say this because there's two generations of supporters who haven't witnessed that and the ones who came along today, I was really pleased for them," said Shiels, picking out teenagers Mark O'Hara and Rory McKenzie for praise.

"What can you say? The boys were exceptional.

"A young 16-year-old made his debut at right-back, with an 18-year-old just in front of him and they were unbelievable."

The Ayrshire side had lost their last two matches in the Scottish Premier League and Shiels was happy to see them back on the right track.

"We were as good this week as we were bad last week," added Shiels. "I was so angry with myself all week.

"We had a good game plan and I think it worked very well for us."