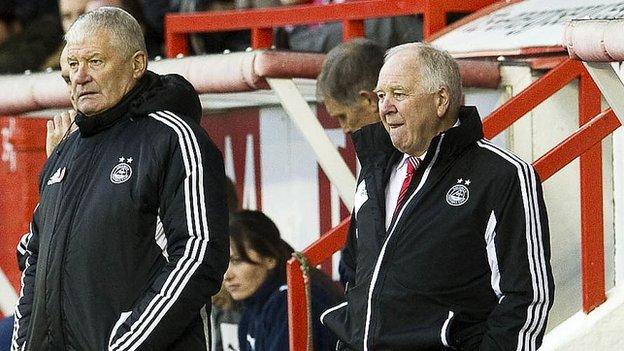 Aberdeen manager Craig Brown thinks his side can do better despite beating Dundee 2-0 at Pittodrie.

Goals from Niall McGinn, who has now scored in his last five matches, and Jonny Hayes moved the Dons into third placed in the table.

Aberdeen now have 18 points from their opening 11 Scottish Premier League matches, but Brown expects more from his players.

We think we can improve the performance

"We're pleased with the results we're getting, but I couldn't say today's performance was a convincing one," he said.

"We'll take the result more than happily, but we think we can improve the performance.

The result leaves opponents Dundee marooned at the foot of the league with only four points.

"I think the credit goes to Dundee - they don't deserve to be quite as isolated as they are at the moment," Brown said.

"It was a problem to break down the Dundee defence. I thought Dundee competed well, although I can't remember Jamie Langfield having a save to make."

One player who has pleased Brown is striker Niall McGinn, who became the first Aberdeen player to score in five consecutive matches since Duncan Shearer.

"Niall is on a hot goal-scoring streak, when you look at the attributes he's got, they're ideal for a striker," said Brown.

"The first thing is he shoots the ball very well, he's scored a couple of goals with his head, for his size he heads it well and he's got a real burst of pace."

Despite sitting third, behind second placed Hibernian only on goal difference, Brown refuses to get carried away.

"I always believe in under-playing your hand and don't start shouting what you're going to do," he added.