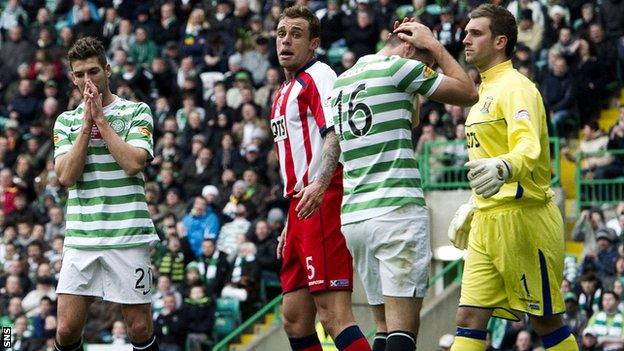 Having praised his side so highly after Tuesday's loss in Barcelona, Lennon said: "We've been brought back down to earth with a big bump.

"Second half, we created some decent chances, but not enough, and we've come away with a massive dose of reality.

"But I take responsibility. I picked the team, so the buck stops with me."

However, Celtic were seldom a threat and goals from Cillian Sheridan and Liam Kelly in either half gave Killie a deserved first success in the east end of Glasgow since 1955.

"I maybe have to look at my team selection, but I felt that, with the demands of the game on Tuesday, there would have been a bit of fatigue," explained Lennon.

"We tried to freshen it up, but we were poor.

"We gave two goals away without Kilmarnock really having to work for it.

"We had good players out of the pitch, but there was no urgency or tempo to our game. We made life very comfortable for Kilmarnock.

"It's like we were out for a testimonial in the first half. We weren't turning them or stretching them.

"I don't recall a real 50-50 in the game when there was a real desperation for us to get the ball back or move with any real intent."

Next up for Celtic is a Scottish Communities League Cup quarter-final with St Johnstone and Lennon made it clear he will be altering his line-up.

"I'll be looking for a reaction on Tuesday," he told BBC Radio Scotland.

"There will be changes. I can't accept that."