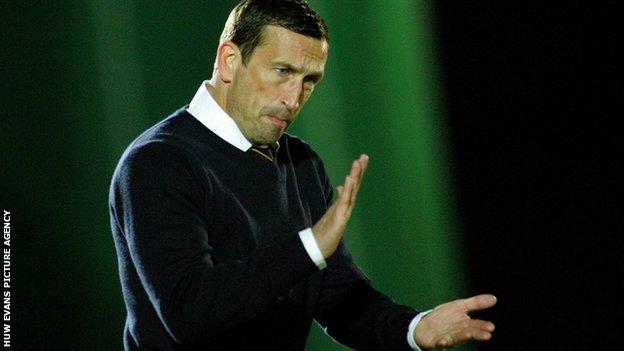 Manager Justin Edinburgh says he will have no problem dropping players who are "not good enough" to keep Newport County on the top of the Conference.

Backed by a multi-millionaire chairman, Edinburgh says he has already targeted new signings to "freshen" his squad.

"If some of the players aren't good enough to continue then some will have to go and we'll try to get some fresh bodies in," said Edinburgh.

"They've been given an opportunity and obviously if they don't take it they have to move on and we have to bring in new players to the club.

"We can't look back, we've got to look forward. We'll try to maintain where we are. I'll certainly give it everything I've got."

Edinburgh, who had called for a response from his players following Tuesday's shock FA Cup exit to Yate Town, refused to disclose which positions we was looking to strengthen.

"Until we concluded the deals to bring them into the football clubs, that's irrelevant right now, but we certainly need to freshen things up," he said.

"We hope to have one or two in by next week."

A free weekend as a result of their FA Cup exit will give Newport 10 days to prepare for their next Blue Square Bet Premier encounter, a home game against 18th-placed Cambridge.

Edinburgh believes the break comes at a perfect time for his team.

"I think the rest is needed. We've taken the squad to the well," he said.

"We have to be at our maximum to win every game. People have got to be realistic - although we remain optimistic and want to push on, that's only our fourth defeat this season.

"It's a our first home defeat in the league. Did we ever think we'd be in this position? No. I'll be open and honest about that.

"But we are where we are and we want to stay there. And if that means we have strengthen the squad and some players that have been brought in are not good enough to maintain where we are, then we have to change things about."