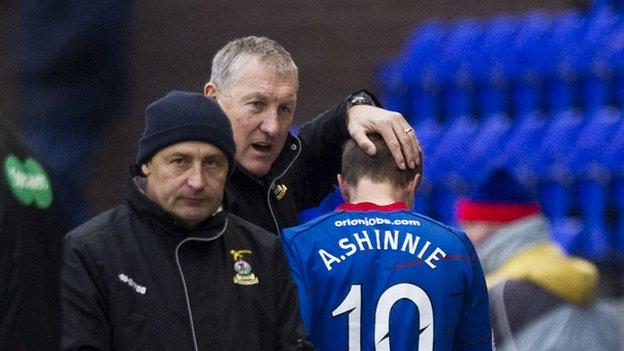 Inverness Caledonian Thistle manager Terry Butcher felt his side deserved more than a point from the 1-1 draw with St Johnstone.

The home side led until the final minute of the game, when David Robertson equalised for the Saints.

Despite the setback, Inverness remain unbeaten in seven matches.

"I'm just delighted with the way we played in the last 20 minutes, we played some lovely stuff, and should have won the match," Butcher said.

Inverness should have been ahead when they were awarded a penalty with 20 minutes to play butAndrew Shinnie blazed the ball over the bar.

However, Butcher's men did go ahead shortly afterwards, Billy McKay with the goal.

"I'm disappointed that we haven't won the game, lack on concentration in the last few seconds - we paid a heavy price for that," the manager told BBC Radio Scotland.

"For me it's a bread and butter ball in to the box, I'd be aching to get my head on that one.

"I think Gary Warren called and didn't go for it, to let a ball bounce like that in your box is criminal and it's begging to be put away by the opposition.

"Up until then I didn't really fancy St Johnstone to score, I fancied us to go on and get our second."

Despite the result, 53-year-old Butcher was happy with his team's performance.

"In the end we haven't got the three points we deserved, but we keep the unbeaten run going - seven matches - I think the way the boys played and the way they're working together is very exciting," he added.

Butcher is now looking to extend the contract's of some his players.

"We'll try and speak to some players next week, even though we have a game, it's important we say to them that they're very much wanted here and we'd like to progress with them here," he said.

"I'm excited by this side, it's a team that's evolving and learning about each other all the time and playing some good football as well and it's pleasing to see that, we want some more people to come and see that, which would be nice.

"For the people that do come along, I think they're pleased with what they see."