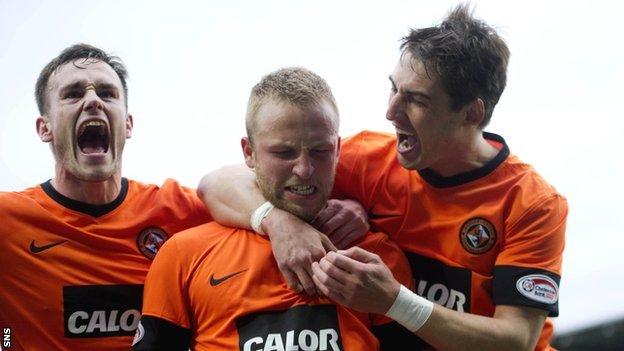 Peter Houston was pleased to end Dundee United's winless run but confessed his side had gained victory in Paisley "without being brilliant".

in a game of few chances.

And Houston said: "I didn't think we got anywhere near the standards that we performed to last week [the 1-1 draw with Aberdeen].

"But I'd rather take the three points and grind out a result."

United's top scorer from last season, Jon Daly, was once again deployed in defence and the manager is pleased with how the striker has responded.

"I felt we needed his presence at the back over the last couple of games and he's relaxed about the situation," said Houston of his captain.

"He does a job and doesn't complain about it. He's not a selfish person. He wants the team to win. He's more of a team player than an individual wanting to win a golden boot.

"He's a threat in the oppositon box, but he's also massive when you're playing against big guys like [Sam] Parkin, [Steven] Thompson, [Lewis] Guy.

"Sometimes games like that can flick a wee switch to get the breaks. It can change your season. It happened last year.

"We've still got two games in the hand in the league and, if we win, it'll put us into third position, although the games are against Celtic and Motherwell - two very difficult fixtures."

Rudi Skacel made his Dundee United debut as a second-half substitute sporting the number 51, a reference to Hearts' 5-1 victory over Hibernian in last season's Scottish Cup final, in which he scored twice.

Houston insists he did not realise the inference until after it was too late to change the number.

"Once you register it, you can't go back on it, but I apologise to the Hibs fans because, if I'd known, I wouldn't have given him the number," added the United boss.

"It wasn't until the next day that someone mentioned it to me.

"I'm not in the habit of trying to noise people up or noise other clubs up because Hibs are a fantastic club. It's not my style to upset people.

"We've got him until the end of January. Sure, he's the type of player we'd like to keep.

"He was brilliant in the negotiations. He's not anywhere near the kind of money probably that he was on at Hearts and all he wants to do is play."