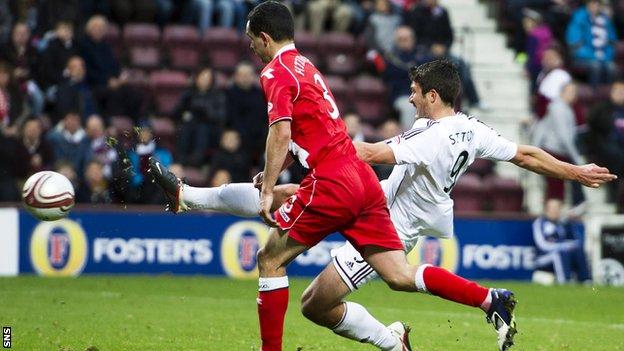 Hearts manager John McGlynn seemed unsure whether to laugh or cry after seeing his dominant team grab a late point against Ross County.

The home side had the bulk of the chances but found themselves trailing 2-1 going into the final minute.

However, substitute striker John Sutton bulleted in a leveller with the last kick of the ball at Tynecastle.

"When you are 2-1 down you want to go to the death. We did that. I am glad big Sutty got the goal," said McGlynn.

But Fraser made a string of impressive blocks that seemed to inspire his team-mates.

Richard Brittain levelled from the spot after a foul by Andy Webster and the visitors moved in front thanks to Stuart Kettlewell's composed low strike from 20 yards.

"We've got to be grateful that we didn't give up and that we salvaged a point but it's still two points dropped," said the Hearts boss.

"I thought we were totally dominant in the first half.

"Ross County must have had three or four chances; it doesn't quite add up.

"It's disappointing. We are not killing teams off."

Fraser denied Novikovas on a few occasions, and stopped efforts from Stevenson, Sutton and Callum Paterson.

"If it's not Rab Douglas, it's Fraser," lamented McGlynn.

"It just seems to be that keepers pull off great saves against us.

"We've got to capitalise when we are so far ahead.

"When you are not scoring regularly, as your play would merit, you tend to snatch at things so we are maybe not showing enough composure in the goalmouth to convert these chances."

Hearts play Dundee United on Wednesday in the Scottish Communities League Cup, with Sutton's late goal creating a selection dilemma for his manager.

"That's what John has got to do," said McGlynn of the substitute striker's equaliser.

"That gives me food for thought for Wednesday night.

"But Callum Paterson is a handful and he caused the Dundee United defenders problems when he played up at Tannadice."