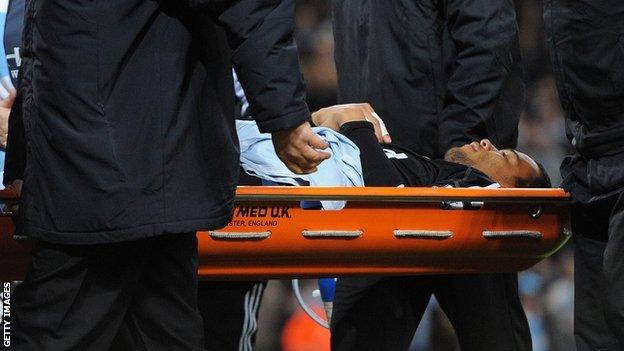 Swansea City goalkeeper Michel Vorm may be out for up to eight weeks after he was carried off on a stretcher in their 1-0 defeat at Manchester City.

The Dutch international was forced off after injuring his groin while trying to save the Carlos Tevez shot that gave the hosts a win at The Etihad Stadium.

Vorm had a scan on Sunday and the Welsh club have revealed the 29-year-old will be out for longer than first expected.

"You are looking at six to eight weeks out," said Swans physio Kate Rees.

"Michel has a partial rupture of his adductor muscle."

Games Vorm is set to miss

Vorm has been one of Swansea's most consistent performers since their promotion to the Premier League last season and his for £1.5m.

The 29-year-old immediately signalled for medical attention after diving at full stretch attempting to save Tevez's 30-yard winner that fired Man City to second in the Premier League table.

Vorm, who at Swansea in September, clutched his groin in obvious pain and received oxygen before being carried off.

His absence will be a big blow to Swansea who face a tough run of fixtures, starting with Wednesday's Capital One Cup fourth round tie against Liverpool.

The Swans then play Arsenal, Norwich, Tottenham Hotspur and Manchester United before Christmas and Laudrup will hope Vorm will be fit for their Boxing Day clash at Reading.

German Gerhard Tremmel, who was in goal for Swansea's two previous Capital One Cup games this season, replaced Vorm on Saturday and is ready to deputise.

The former Red Bull Salzburg keeper made only his sixth appearance for Swansea when the 33-year-old came off the bench after 64 minutes against Premier League champions Man City.

But Laudrup insisted: "Gerhard is ready - and we have an important game at Liverpool on Wednesday in the cup.

"It is some games to start with for Gerhard with Liverpool away and Chelsea at home.

"It is very sad for the ones getting injured but that is a part of being in a sport like this. Injuries happen and the next man suddenly has to be ready. Now it is his turn."

Swansea will also be without defender Angel Rangel at Anfield as the Spanish right-back picked up his fifth booking of the season against Man City.