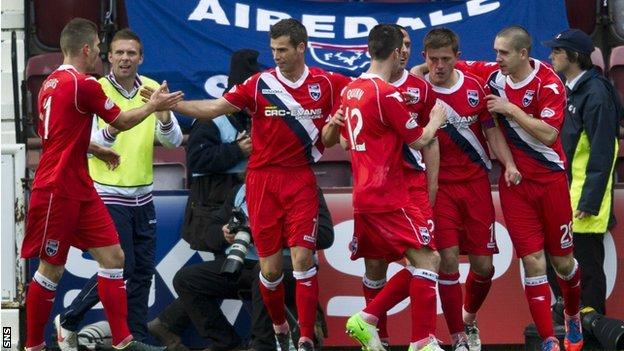 Derek Adams chose to look at the bigger picture in the Scottish Premier League after seeing his Ross County team lose a last-minute equaliser at Hearts.

The County boss accepted the 2-2 draw was fair, given Hearts' chances, and the point gives his team 12 points after a full round of top-tier matches.

"But overall I couldn't be happier with the first 11 games."

This is the Staggies' first season in the SPL, having progressed through the divisions since their switch to the Scottish Football League from the Highland League in 1994.

County are ninth in the table, but are only six points behind second-placed Hibernian.

"I am delighted with the progress we have made," said the manager of his team this season.

"It's not easy coming here. We have come up from the First Division and we have done exceptionally well in our first 11 games.

"I'm delighted but we probably should have more points than we have.

"At the start of the season we picked up a lot of nil-nils but we have opened up a wee bit since then.

"I was pleased with the whole team. We are on a different planet from Hearts and Hibernian - we come from a wee village up in Dingwall."

County went into the match at Tynecastle on the back of a 3-2 win over Hibs in Dingwall last weekend.

They fell behind to an Arvydas Novikovas strike and, with keeper Michael Fraser in superb form, moved ahead through a Richard Brittain penalty and a Stuart Kettlewell strike 13 minutes from time.

John Sutton salvaged a point for Hearts with the last kick of the ball.

Adams said afterwards: "It was two points dropped at the end because we were 2-1 up before the last kick of the ball.

"I thought overall a point is fair. Hearts definitely played better than us in the first half and in the second half we came into the game.

"Kettlewell put us ahead and they definitely put us under a lot of pressure.

"I would expect nothing else coming to Tynecastle.

"Michael did very well, he made a number of important saves for us.

"They are a good side, they have a number of experienced players.