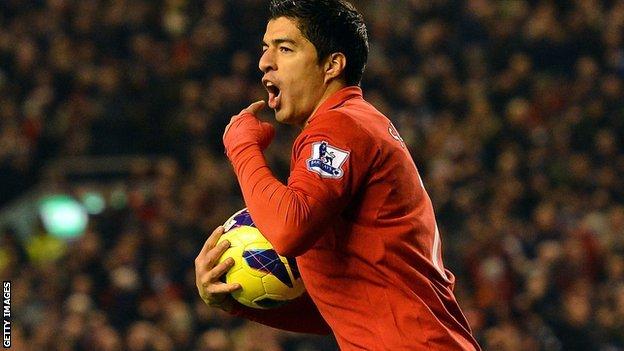 Luis Suarez scored a stunning goal as a dominant Liverpool were held to a point by 10-man Newcastle at Anfield.

The Uruguayan brilliantly controlled a long ball from Jose Enrique ball on his shoulder before rounding keeper Tim Krul and scoring with his third touch.

Newcastle's Yohan Cabaye showed the finishing prowess the Reds lacked in the first half when he powered in an acute angled strike before the break.

Fabricio Coloccini was sent off for a dangerous challenge on Suarez late on.

While Liverpool have now gone five league games without a defeat - their longest unbeaten run in 2012 - it was a game in which the familiar story of their season unfolded as they failed to make the most of their possession and chances.

The visitors displayed defensive fortitude to frustrate their hosts, but Suarez's goal denied the Magpies a first win at Anfield in 18 league games since April 1994.

Skipper Steven Gerrard was playing his 600th game for the Reds - moving him to 10th in the club's list of all-time appearance makers - and the midfielder has been the inspiration for his team on a regular basis since his debut in November 1998.

"Not having that at all. [Coloccini] didn't touch him and to say there was intent is laughable. Let me tell you, he kicks a moving ball a thousand times a day and doesn't miss it once. If he wanted to connect with a standing leg then he wouldn't have missed. He pulls out at the last minute and doesn't touch him. Not having that's a red at all."

But it was Suarez who was Newcastle's chief tormentor in a game the Reds began with obvious urgency.

The home side did not take long to get into their passing stride and they quickly started to pile on the pressure, with winger Raheem Sterling's pace and trickery a particular concern for the visitors.

Suarez is never far from the action and he was soon left indignant when referee Anthony Taylor ignored his penalty appeal after he was caught by Coloccini.

Newcastle had to show the steel that has been a hallmark of their game this season to keep the Reds at arm's length.

The closest Liverpool came to a goal in the first half was when Suarez had an angled shot across goal saved by the foot of keeper Tim Krul and a Suso strike was deflected over.

But the visitors gradually came into the game and then stunned the home side by taking the lead.

Hatem Ben Arfa jinked to the byline and crossed to the far post where Cabaye controlled before rifling home a shot.

It was a goal that highlighted exactly the type of ruthlessness in front of goal Liverpool sorely miss.

Suarez had a low curling shot saved and Nuri Sahin scuffed an effort narrowly wide as it seemed Liverpool's problems in front of goal would continue.

But, after Jonas Gutierrez gave the ball away, Suarez brilliantly took down a long Enrique pass before touching the ball around Krul and slotting into an empty net.

The Uruguayan then set up Jonjo Shelvey and Sterling for chances to win the game but both wasted their opportunities.

Shelvey failed to get the required purchase on a pull-back, while Sterling was denied when his shot was deflected high off the sliding Steven Taylor.

As Liverpool pressed for a late goal, Newcastle almost exposed the home side at the back with Papiss Cisse volleying wide and Ben Arfa having a shot saved by keeper Brad Jones.

Coloccini's 84th-minute dismissal put the visitors under some late pressure and a deflected Suarez free-kick looped over before both teams had to settle for a draw.