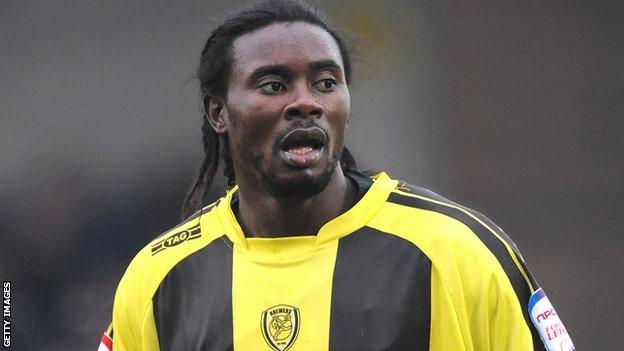 Damien Reeves missed an early penalty before Carl Rodgers's close-range finish put the non-league side ahead.

Burton's Nathan Stanton steered a corner into his own net but two Zander Diamond goals, both coming from Lee Bell deliveries, made it 2-2.

Robbie Weir also missed a penalty for the hosts, a Damien McCrory own goal put Altrincham back in front but Zola's injury-time header forced a replay.

However, Rodgers and a Stanton own goal put the visitors 2-0 ahead, before Burton fought back.

Diamond's first goal made it 2-1 and Weir missed a golden chance to equalise, sending his penalty over the bar after he had been pushed by Jake Moult, but Diamond made up for Weir's error when he levelled with his second.

Altrincham thought they had won it when McCrory steered the ball into his own net from six yards out with five minutes remaining, but Zola headed in from Jordan Chapell's cross to make it 3-3.

The winners of the replay will face League One side Crewe at the Alexandra Stadium in the second round.

"Anyone who says the Cup isn't a magical competition can probably think again after that game, because it had a little bit of everything in it, didn't it?

"I thought Altrincham were absolutely fantastic and that's what this competition is about. It's about the lower teams rising to the occasion and I'll take my hat off to them, because in spells of the game, they did really well.

"We told our guys we needed to play with real tempo from the start - we need to do things quickly and aggressively from the start, but we didn't do that. At half-time I told them 'everything we asked you to do, they've done it and we haven't' and I thought that gave us a problem.