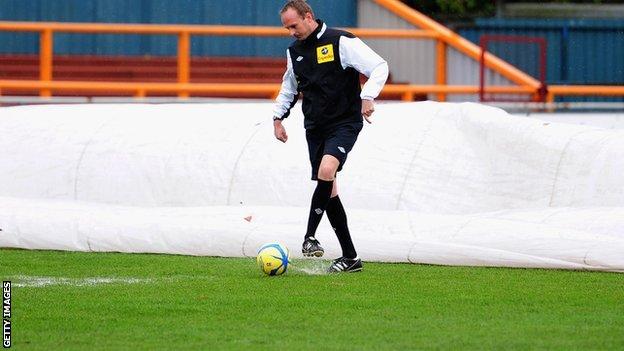 Braintree Town's home FA Cup first-round tie against League One leaders Tranmere Rovers has been postponed because of a waterlogged pitch.

The Blue Square Bet Premier side were set to host Rovers in a televised match at the Amlin Stadium on Sunday.

Groundstaff covered the pitch following heavy rain in Essex, but it could not prevent the tie being called off.

Referee Dean Whitestone inspected the playing surface at 11:00 GMT on Sunday and deemed it unplayable.

No new date has yet been set for the rearranged game.

"I'm totally gutted. It was nice and dry on Saturday but we get this today and there's not a lot we can do about it.

"I felt the referee should have waited another 30 or 45 minutes to see if the weather stopped.

"We've worked hard this week to prepare for this game. They [ITV] say they still want to televise it and I hope so but we won't know for a few days.

"We have to be professional about it, we've got a big game on Tuesday [against Lincoln] and we've not played for a couple of weeks."

"To be fair to the referee, he's worried about safety. It's not particularly the pitch - it's on the outside of the pitch where there's water and players can slide through straight into barriers.

"The rain's come down at the wrong time and I guess the referee had no option but to call it off."