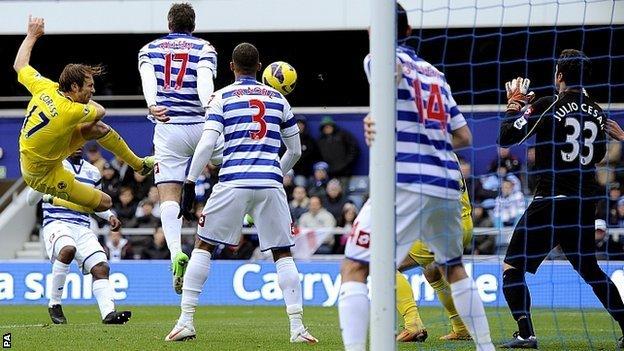 Struggling QPR and Reading are still searching for their first Premier League win of the season after playing out a disjointed draw at Loftus Road.

But Rangers, who did hit the bar through Esteban Granero's free-kick, improved significantly after the break and levelled courtesy of Djibril Cisse's cool close-range finish.

Adel Taarabt almost won it late on but Alex McCarthy saved with his feet.

Three clubs have avoided relegation from the Premier League after failing to win in their first 10 matches of the season: Everton in 1994-95, Blackburn Rovers in 1996-97 and Derby County in 2000-01.

Taarabt's chance on the break, after great work by Cisse, was QPR's best opportunity of an increasingly frantic and end-to-end second period.

But although Reading could also have won it late on when substitute Jimmy Kebe's shot was blocked - and had been much the better side before the interval - the visitors will ultimately have been relieved to hang on for a point after being outplayed for much of shapeless second half.

The point is enough to lift QPR off the bottom of the table, moving them above Southampton on goal difference.

But seeing as neither team had a Premier League victory between them prior to the game, two of the top flight's bottom three had pinpointed this fixture against fellow strugglers as an opportunity to put that right.

And the match - although predictably short on real quality - at least provided plenty of tension and excitement from two teams desperate to get their season up and running.

The Royals showed no signs of a hangover from their astonishing midweek Capital One Cup capitulation against Arsenal and played with confidence and discipline from the outset.

Their early dominance was rewarded when Gorkss smashed the ball home on the volley after Sean Morrison's looping header came back off the bar.

Rangers manager Mark Hughes had said his side must start winning after a series of decent displays against some of the division's top sides had only produced three points from their opening nine games.

But the patience of owner Tony Fernandes, who has continued to publicly back Hughes, will have been tested again by a sub-standard first-half performance.

Stuttering Rangers were sloppy in possession and, in the main, restricted to a series of long-range efforts.

The shooting threat came from moments of individual quality from Taarabt, Junior Hoilett and, to a lesser extent, Jamie Mackie and Cisse.

Taarabt had at least four long-range strikes and Cisse smashed a shot over the bar after a purposeful run.

There were some boos around Loftus Road from the home fans at half-time and Reading were deservedly ahead. But QPR were sharper and brighter and much more competitive after the break and had the chances to take all the points.

But the closest they came was when Granero's fine free-kick produced a brilliant fingertip save from McCarthy during the home side's best spell of pressure.

That dangerous period before the interval - and, no doubt, a half-time lecture from Hughes - sparked the hosts into life.

And their improvement was rewarded when Cisse cleverly controlled Jose Bosingwa's right-wing cross with his first touch and poked the ball past McCarthy with his second.

Taarabt soon tested McCarthy again and was then denied by the keeper's superb reaction stop with his right foot.

At the other end, Reading's Jason Roberts had a shot blocked, as did Kebe after a mazy run.

But neither side could find the crucial breakthrough and both remain winless and in the relegation zone.

"It was a good point and a really good away performance.

"We could have had a second goal and I thought if we got that second goal, the game would have been done and dusted. But having said that, Alex McCarthy made a couple of wonderful saves and they hit the bar in the first half.

"We showed great spirit I know these players. People talk about picking the players up [after losing to Arsenal], but it was never an issue. We have a real spirit and we just kept going.

"QPR have some real quality, and Chelsea and Everton only drew here, so this in not an easy place to come to. We'll take the point."