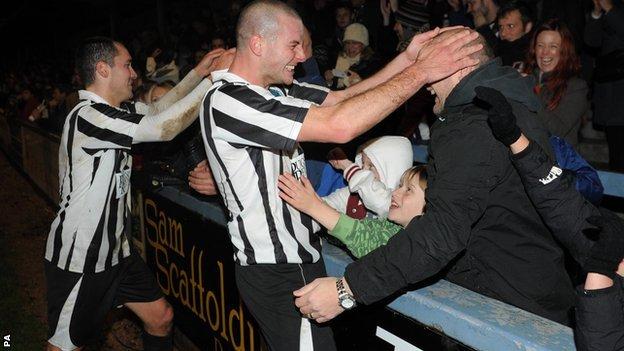 Dorchester Town caused one of the shocks of the FA Cup first round, beating 10-man Plymouth with a goal from former Argyle junior Jake Gosling.

Plymouth had Conor Hourihane sent off inside nine minutes and the League Two side almost fell behind when Charlie Clough headed against a post.

But the Blue Square Bet South team would not be denied, as Gosling fired in from 10 yards to seal a famous win.

Phil Simkin's team will travel to either Luton or Nuneaton in

Carl Fletcher's Argyle were in the first round last season and the chances of another upset were increased once Hourihane was dismissed for two yellow cards.

The first was picked up for an ugly foul and the second for taking a free-kick too quickly.

After a slow start, Dorchester improved once they had the advantage of an extra man.

Clough's header was the closest they came to a goal in the first half, but they started the second period in stunning fashion.

Jake Smeeton's left-wing cross was kept in play by right-back Mark Jermyn and 19-year-old winger Gosling, who is on loan from Exeter, crashed the ball high into the net past goalkeeper Rene Gilmartin.

Plymouth forced a series of corners as they pressed for an equaliser, but Dorchester held on for their first ever victory against a Football League club in the FA Cup.