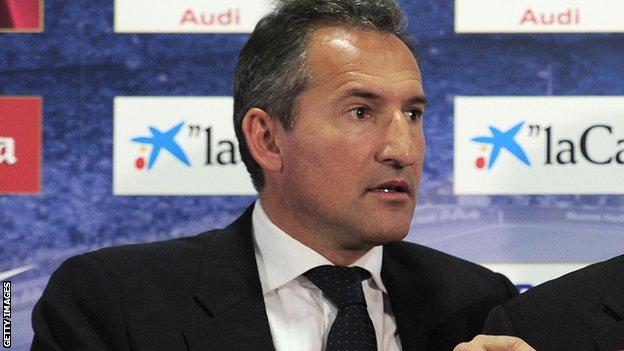 Manchester City have appointed former Barcelona technical director Txiki Begiristain as their director of football in a management restructure.

Former Arsenal winger Marwood has moved to a new role as managing director of the club's football academy.

Txiki Begiristain's appointment sees the arrival of one of European football's most highly-respected figures at Eastlands.

It may also remove a point of friction within City's football structure with Mancini never perceived as having a comfortable relationship with Brian Marwood.

Begiristain worked at Barcelona from 2008 to 2010 with new City chief executive Ferran Soriano.

Marwood's new role is involved with City's new youth development and first team training facility, which the club want operational for the start of the 2013-14 season.

"Given the scale and importance of this challenge, we want to commit our very best people to it," Soriano announced on the club's official website.

"I am delighted that Brian Marwood will take leadership of the CFA initiative and I am equally very pleased to welcome an individual of Txiki Begiristain's calibre to the club.

Who is Txiki Begiristain?

"I have no doubt that together, and in support of Roberto Mancini and the wider football club, they will be a formidable team."

Begiristain's playing career began with Real Sociedad before he moved to Barcelona in 1988. Capped 22 times by Spain, he ended his career with Urawa Red Diamonds in Japan after a spell with Deportivo La Coruna.

Following his retirement Begiristain worked as a television pundit before he returned to the Nou Camp as technical director in 2003.

Ronaldinho, Samuel Eto'o, Thierry Henry and David Villa were among the players recruited while Begiristain was with Barcelona. He also maintained the club's youth programme, with Sergio Busquets one of several young players successfully moving into the first team.

Begiristain left Barcelona on the same day that Joan Laporta stepped down as club president in June 2010.