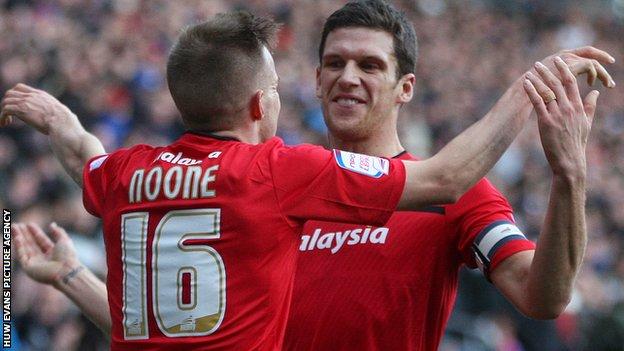 Cardiff City manager Malky Mackay revelled in his team's "most complete performance" of his tenure against Burnley on Saturday, but warned his players not to dwell on the plaudits.

The Bluebirds returned to the top of the Championship with a 4-0 win.

But Mackay, whose side were in top spot last season before falling away, says October is not the time to start thinking they are the league's best.

"If you start thinking like that you'll get carried away," Mackay said.

"We're up there after 13 games, which is fantastic.

"We've got to keep being relentless, keep being monotonous, keep working hard, keep studying the game plans, keep looking tactically at the opposition, train to a certain standard and the games will chop off.

"It's a relentless league - I've been in it for years. It's unforgiving and there's a lot of games to go.

Joe Mason, benefiting from injuries to Craig Bellamy and Tommy Smith to make only his third start of the season, gave Cardiff a third-minute lead against managerless Burnley on Saturday, and the home side went on to enjoy almost total control.

Further goals followed from Craig Noone, Matthew Connolly and Aron Gunnarsson sealed a seventh successive home win since the start of the season.

Mackay said he could barely find any faults in the display, ranking it as the best he has seen since taking over in June 2011.

"It was the most complete performance that we've had, certainly in terms of being clinical and completing the final pass," he said.

"I thought we played very patient against Watford on Tuesday night and got into similar areas but didn't manage to make that final clinical movement.

"Against Burnley I think we did."

Top spot has not been an unfamiliar position for Cardiff over recent years, particularly in the first half of the season.

The Bluebirds have struggled to stay the course, though, failing in the play-offs for the past three seasons in a row.

That unenviable record prompted captain Mark Hudson to call on his team-mates to relish the challenge of being leaders, and they have responded with three wins from four in October.

Of their current points total of 28, only seven have been accumulated on their travels.

But Mackay, whose side will be away in four of their next six games, stressed there is no reason why they cannot replicate their home form on the road.

"It's something we work hard on," said Mackay, who claims the competition for places in the Cardiff side has led to greater hunger and a higher standard on the training ground.

"Last season we had the second best away record in the league behind West Ham. So it's not a mental block.

"There have been individual errors but it's about the team showing consistency."